Yto Barrada | She Could Talk a Flood Tide Down

“When I moved from Tangier to New York in 2012, my galleries were a bit concerned: what would I have to say, once I no longer lived atop the source of all my preoccupations? I discovered there was Another Tangier. An island in Chesapeake bay of Virginia, just a few hours drive from NYC… and a little research revealed that not only did this Tangier have a particular name – it was, like the Moroccan version, one of the more interesting places on earth.

The landmass these Tangiermen inhabit has shrunk 67% since climate change began; scientists predict that the town will surrender to the rising sea levels in the coming decades.

The population of around 500 mostly subsist from soft-shell crabs and tourism. When I visited though, the most striking aspect of Tangier was that I couldn’t understand anything they said.

This insular culture has preserved a heirloom variety of British-English, spiced with the twang of the American South, rendered even more impenetrable by a local idiomatic patois. An unattractive person “ain’t hard favored;” to a smelly person, you might say “Wait a bit, you’re sweet!” And best of all, of a woman who, like me, talks a lot, Tangiermen would say: “She could talk a flood tide down.”

Goodman Gallery is pleased to present She Could Talk a Flood Tide Down, Yto Barrada’s first solo exhibition in Johannesburg and the first with the gallery. By bringing together diverse projects, the exhibition highlights Barrada’s long-established interest in alternative forms of learning, such as mnemonics and spaces of play, as a valuable source of knowledge. The exhibition coincides with Barrada’s solo presentation at The Massachusetts Museum of Contemporary Art, Yto Barrada: Ways to Baffle the Wind, on view until July 2023.

She Could Talk a Flood Tide Down engages different aspects of language and play — and through humour allows for deeper reflection and a closer reading of objects, materials and processes.

The exhibition includes the much-anticipated film Continental Drift (2021). The film-collage assembles Super 8mm film diaries, footage taken over eight years across the US and Morocco, including the rituals of the Grand Socco plaza, home of the Cinematheque de Tanger, the arthouse and cultural center which Barrada founded in 2006. The film also offers a first glimpse of The Mothership, a forest garden and botanical garden of dye plants, and artist residency, founded by the artist. Continental Drift also introduces Tangier characters like the Public Writer; and, as narrator of sorts, an english autodidact who collects Magic Lantern slides and channels local history. In a brief, chilling sequence, the camera has a close encounter with the aging thug who ‘disappeared” Barrada’s own grandfather in the 1950’s.

The intersection of cinema and the archive, themes that often recur in her practice, bring attention to the rigidity of zones and territories while also considering the struggles of sovereignty and migratory flows.

The series of photographs, Plumber Assemblage, Fig.1 – 10, Tangier (2014) considers the romanticism attached to objects characterized as ‘foreign’ and through this process, examines how value is assigned. Found objects such as pipes, faucets, and spigots, which are reused in assemblages by plumbers to advertise their services, are placed outside of their typical context in poses that reconfigure their meaning.

Within the exhibition, Barrada considers the history of place through a reflection on water and land — land reshaped by water; sinking islands and cities at risk of disappearing — through the lens of children’s participation in the construction of the world, inspired by artist Simon Nicholson’s 1971 anti-elitist essay, “How NOT to Cheat Children: The Theory of Loose Parts.”

Land and Water Forms is a series of paintings inspired by Montessori school practices, used to teach children about geography through visual inversion. In the works, landforms are paired and transposed — island/lake, archipelago/lake system, isthmus/canal —drawing attention to the interconnections between physical structures and substances of the earth.

Through humour, works such as Mnemonic Phrases (2019) explore mnemonic devices beyond their linguistic function, placing them within the rhythm of history where found sentences, much like found objects, perform themselves. Fragments of materials interact with each other as self-made tools that inspire new techniques — for instance, cardboard cutouts from the collaged works in Grinding Teeth (2020) are often used as paint brushes to create other paintings, suggesting synchronicity across mediums.

Salient to Barrada’s practice are concepts of pleasure, discovery and analysis, which are formulated through key works that experiment with materials (rust, cotton, natural dyes) and traditional processes. Her methodology is influenced by her background in history and political science. By using visual, textual and sculptural relics, the exhibition finds points of anchorage in historical narrative and aesthetic imagination and simultaneously condenses and stretches the frame of time. 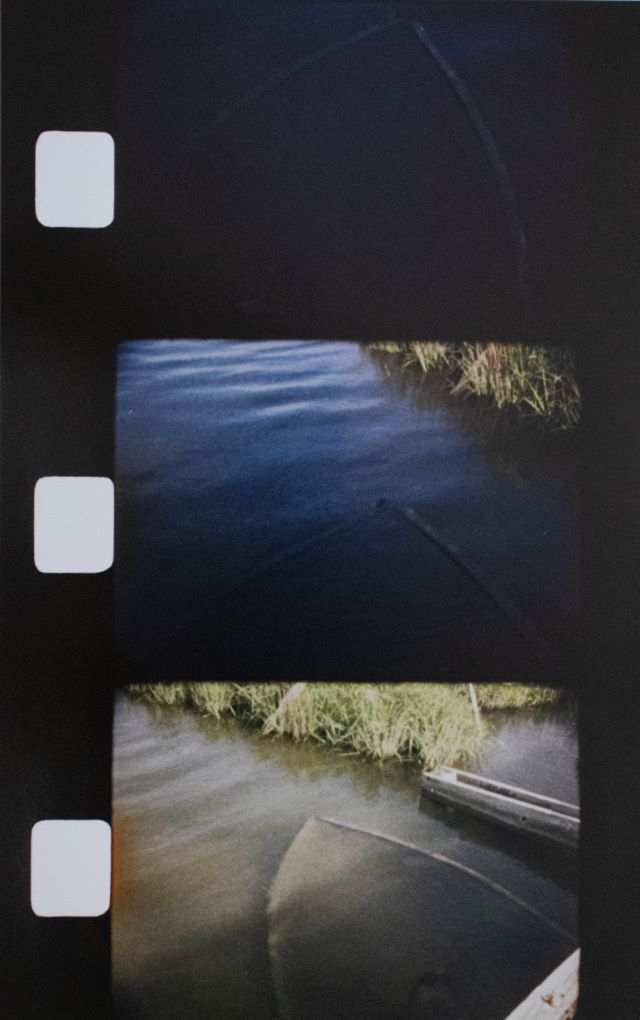 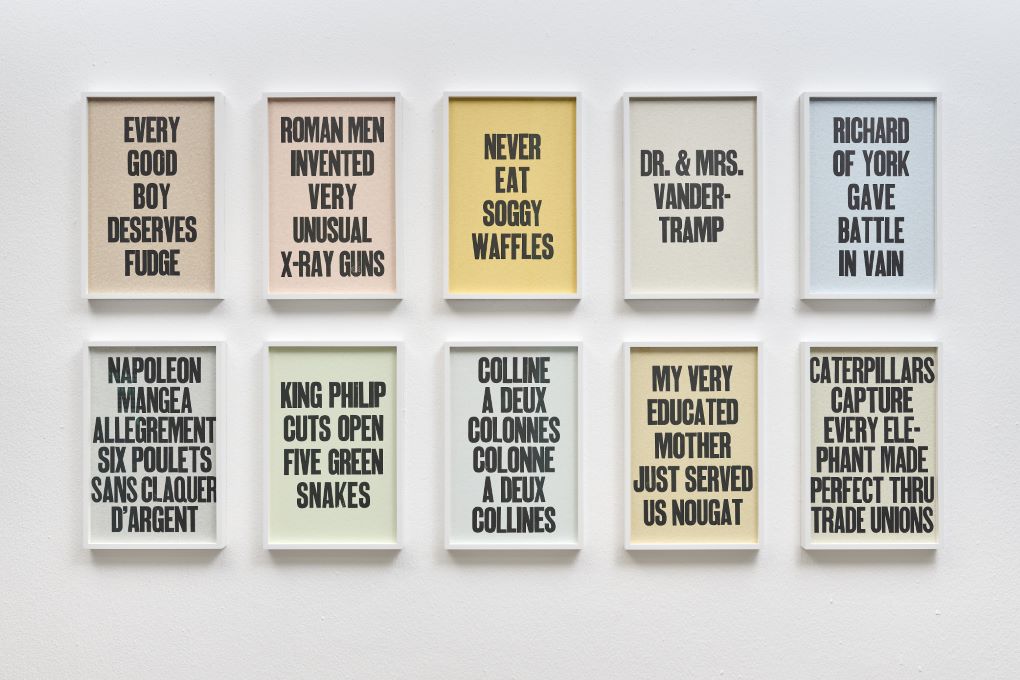 She Could Talk A Flood Tide Down) 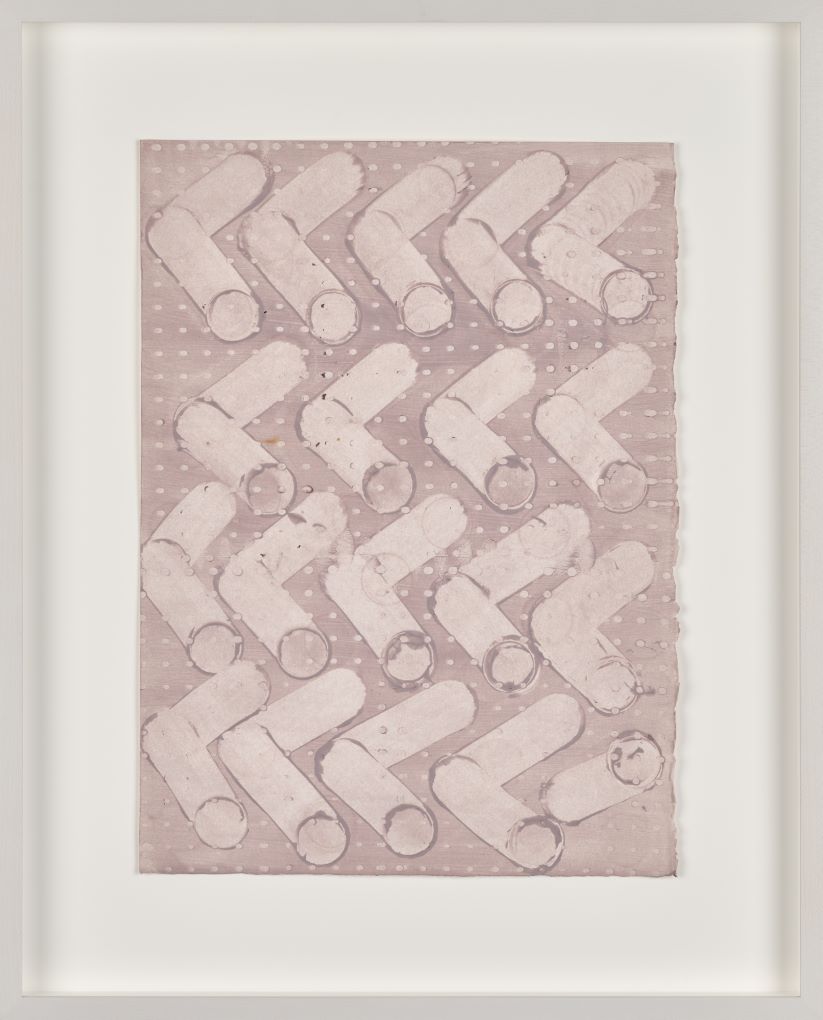 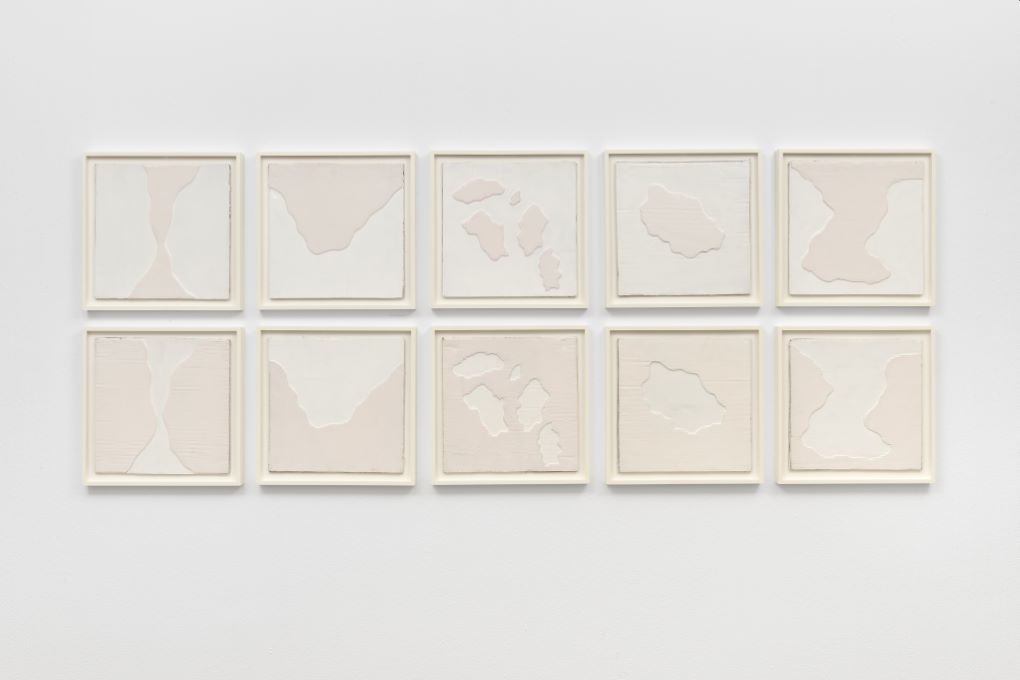 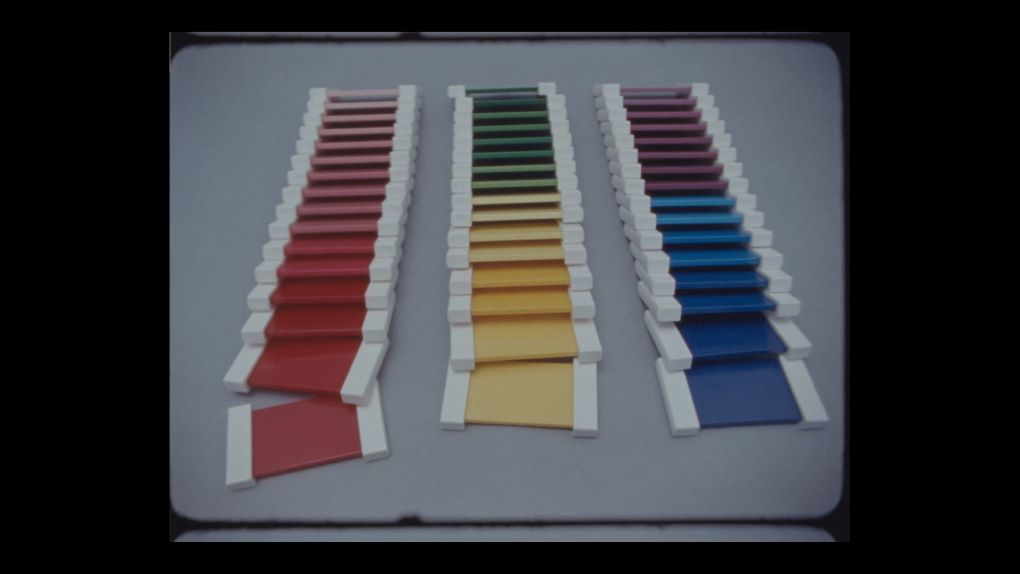 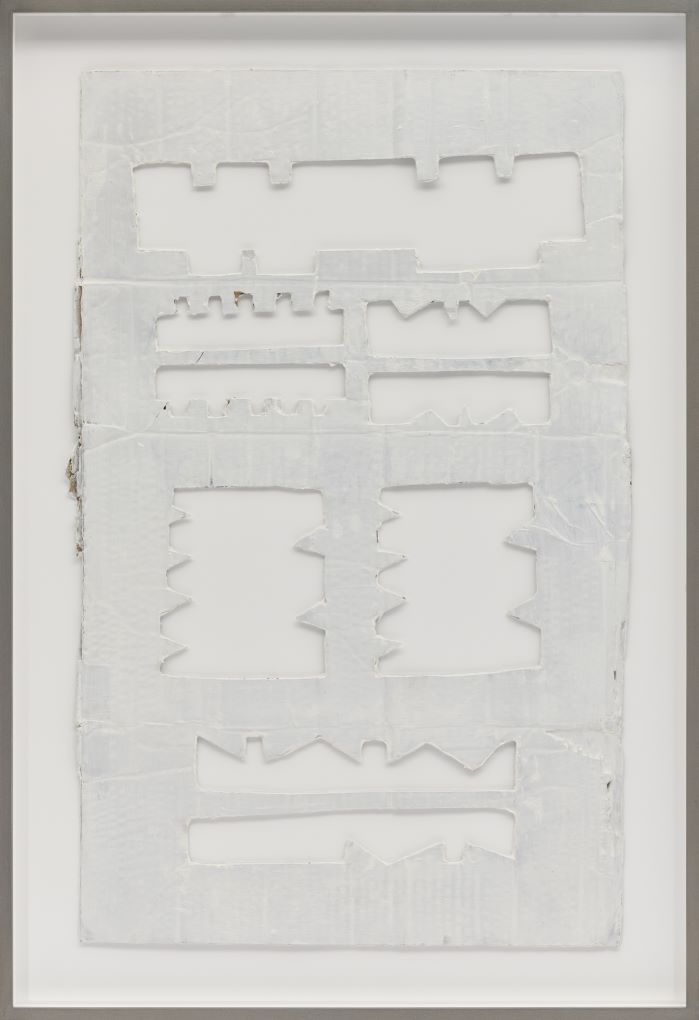 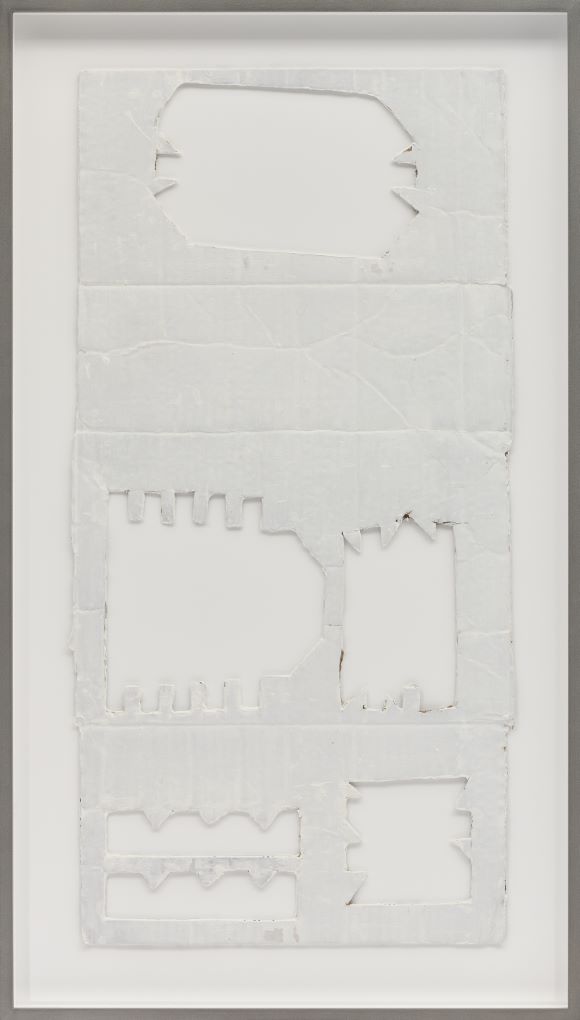 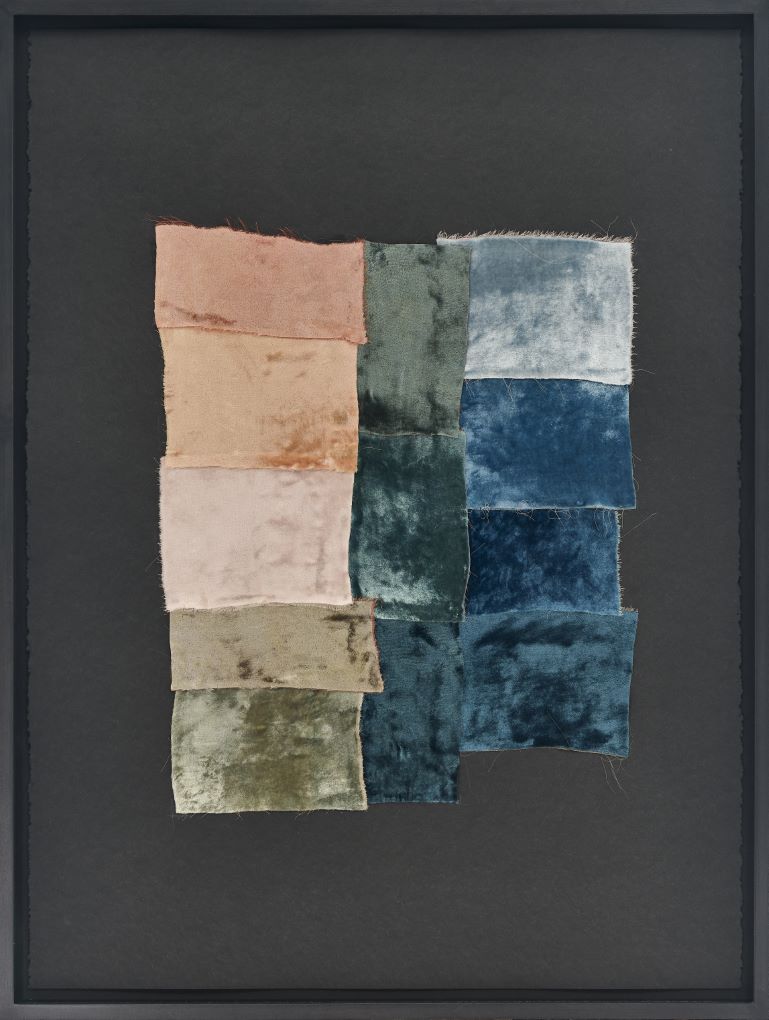 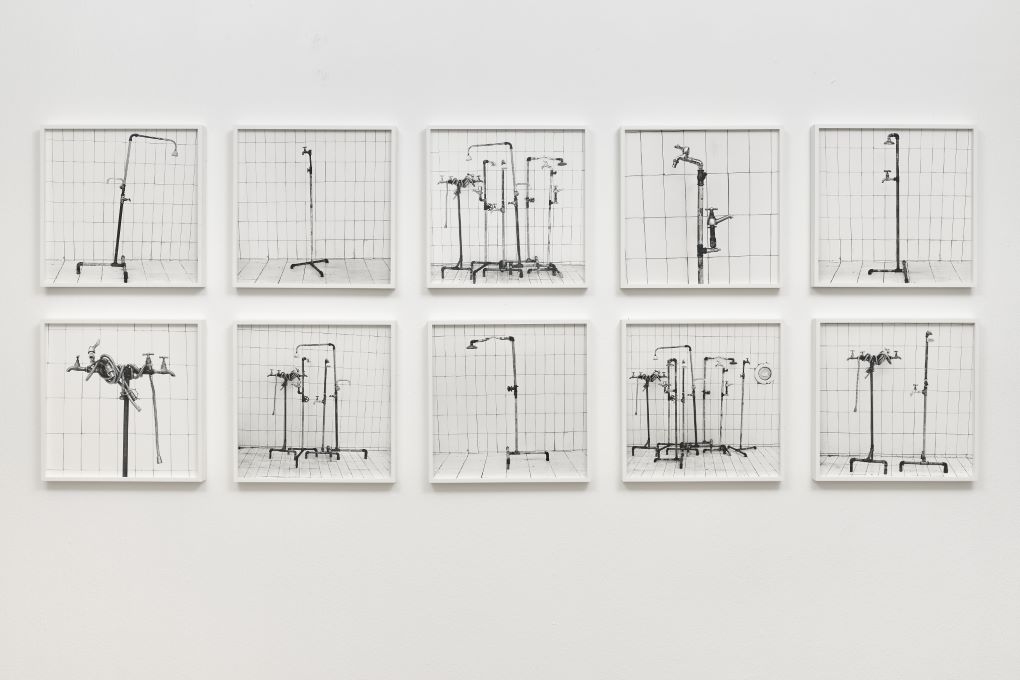 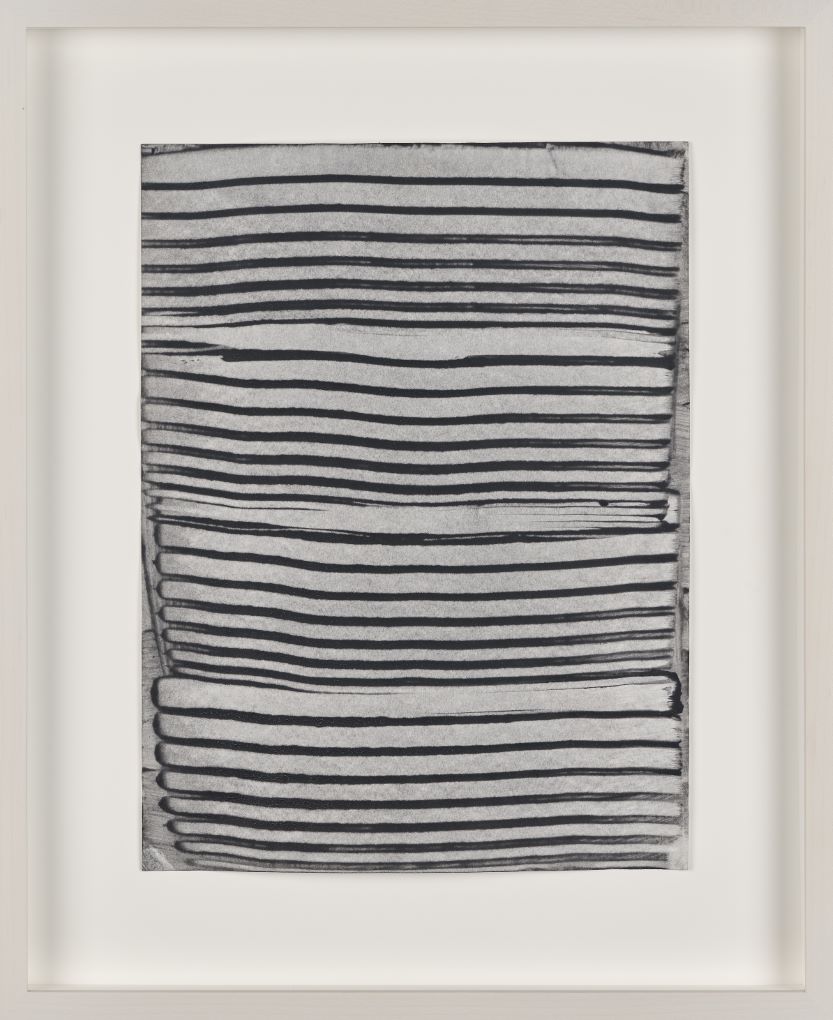 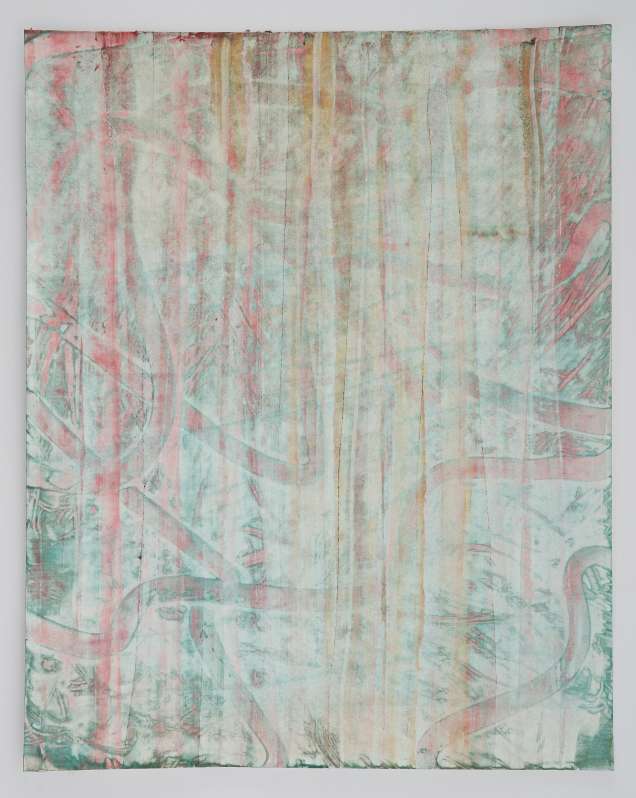 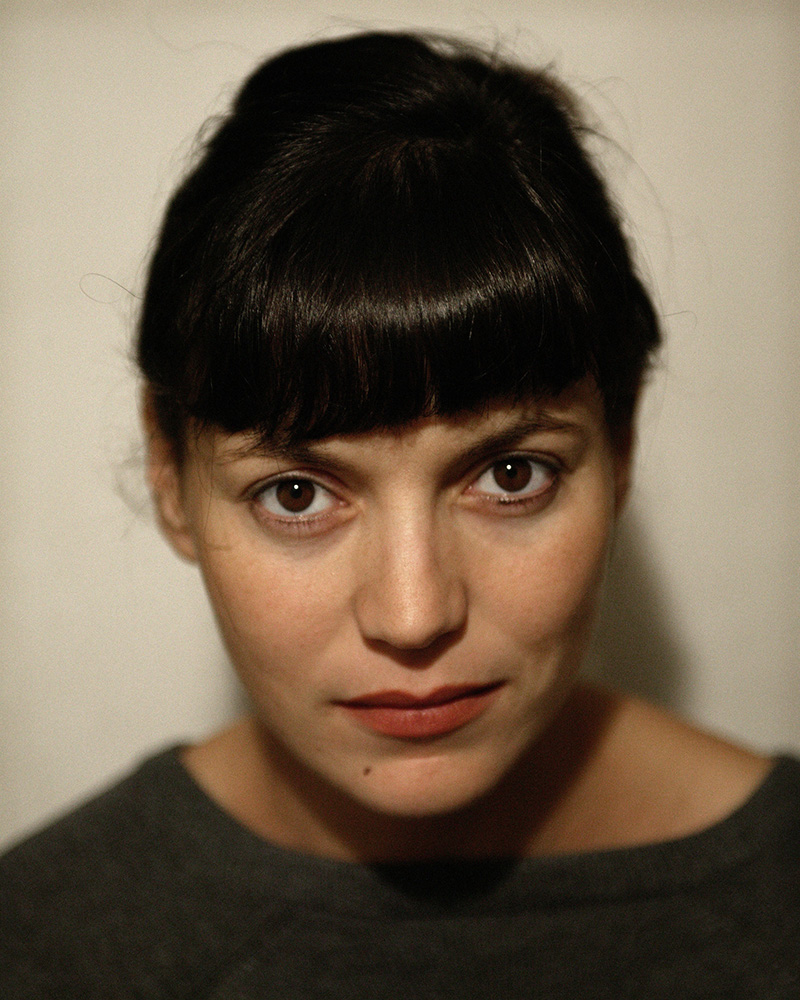 Yto Barrada (Moroccan, French, b.1971, Paris) studied history and political science at the Sorbonne and photography in New York. Her work — including photography, film, sculpture, prints and installations, — began by exploring the peculiar situation of her hometown Tangier. Her work has been exhibited at Tate Modern (London), MoMA (New York), The Renaissance Society (Chicago), Witte de With (Rotterdam), Haus der Kunst (Munich), Centre Pompidou (Paris), Whitechapel Gallery (London), and the 2007 and 2011 Venice Biennale.

She was the Deutsche Bank Artist of the Year for 2011, after which her exhibit RIFFS toured widely. Barrada is also the founding director of Cinémathèque de Tanger. A comprehensive monograph was published by JRP Ringier in 2013. She is a recipient of the 2013-2014 Robert Gardner Fellowship in Photography (Peabody Museum at Harvard University) and was awarded the 2015 Abraaj Prize.