Cassi Namoda || To Live Long is To See Much

Goodman Gallery is pleased to present To live long is to see much, a new series of paintings by Cassi Namoda. The exhi-bition marks Namoda’s debut with Goodman Gallery as well as her first time exhibiting on the continent beside her native country, Mozambique.

Made during lockdown this past summer at Namoda’s home studio in East Hampton, Long Island, this body of work offers a prescient reflection on life experience, thresholds, and the passage of time in Africa. The exhibition presents a series of tableaus and various forms that weave narratives of magic realism into the verdant Mozambican landscape.

Namoda’s practice is rooted in cultural observation gained from a childhood spent growing up between Mozambique, Haiti and the United States. The result is work which incorpo-rates Namoda’s various cultural and artistic references, often drawing on images from archival photographs, memories and imagination.

For this new body of work, Namoda has chosen to use a ti-ght, consistent palette of oil and acrylic paints. Varying in size, Namoda’s paintings feature characters set against vast land-scapes composed of varying colours and broad, sweeping brushstrokes. The characters depicted take part in a range of activities from the simple act of sleeping to religious rituals and mythic scenes. In bringing together this mix of personal experience with broader fictional narratives, Namoda’s can-vasses explore various themes related to the origin of life, the nature of time, history, symbolism, and dreams.

“It’s a very interesting and complex time,” says Namoda, referring to the context in which she has made this work while “thinking about the liberation of Southern African people and the state of diaspora currently in the United States.” This reflection is echoed in the exhibition’s title, which is taken from an accompanying short poetic text written by New York-based writer and Namoda’s research collaborator, Wesley Hardin. In reference to the phrase, ‘To live long is to see much’, Hardin writes:

“There it is—the question that masquerades as an adage: And what of seeing? Or the question beneath the veil of the first question: And, if long-lived, what of learning?”

Pry closed eyes open and it’s violet outside.
Not the colour, but the word, like one consonant—hardly a syllable—separates you from…

It spans across the earth and sky, the violet, in long lashes. From one horizon’s end to the other, and impossibly narrow, like delicate capillaries, or the wisp of a bomber jet as small as a dragonfly. In Namacata, a boy awaits the lull of the afternoon when, upon turning his mind’s eye from the world at hand, he can see the violet veins in the earth and sky. Eyelids heavy, he spots the first lash—it snakes through the ground beneath his bare feet, and beneath his mother’s. Beginning at sunrise, she has spent the morning working this patch of land beside the river, cleaving its salty soils and mixing them with the contents of her pockets: grains, tubers, silt. But the afternoon is his, and with the exquisiteness of a spider at the loom, and the power of dreaming that belongs only to the late day’s sun, he begins his work also.

At each end of the earth, just beyond the last palms and hills in sight, he imagines a great and crude iron spindle. Shetani spirits awaiting at lands-end pluck the veiny tendrils that hang off the edge of the horizon and begin to coil them around each iron, like a spool. With one great turn of the spindles, the violet lash beneath his feet is tightened at each horizon and sprung up from the ground, taut and resonant, to the level of his knees. His mother does not take notice, although she too is caught in the midst of a transfiguration. Where once her hands grasped a trowel’s wooden handle, a joint is now fused; flesh becomes wood; wood becomes steel; she has transformed into a jet-black crescent, a sickle with a glistening grey tip. And with each downward arc of her great extremity, she no longer sows her grain, but instead gently strums the violet string that is stretched across the horizons.

The sound that comes from the strum is one you’ve heard before and I won’t bother to describe it, but other things come too. First, water, so clean and restorative that it erupts from the vein in diamond panes like glass, and can be chewed, savored, and swallowed. Then ivory orchids in an unfurling carpet, trembling just like the ones the boy’s mother had once shown him in the forest, at the base of a rotted ebony. His mother’s mother emerges too, stepping out from behind a palm to assemble a fragrant bouquet for her grandson, her body unlike the one he had glimpsed in the wooden box, with dark hair and full breasts. Then a stream of dazzling earths: ruby, silver, mercury. And a songbird and a jade mountain and a trove of plastic toys. These are the other sounds of God’s instrument…

Awaken, again, and it’s peachy outside. Not the word, but the colour—today, the clouds are the exact shade of palm flesh. A man stands among others in a river: in fact, it’s the same river beside the boy and his mother, only so many countless measures downstream that it’s become an ocean. He lifts his waterlogged hands to find deep, thrombotic creases and veins, and realises now that he’s a man who’s been wading in this river of an ocean for a very long time.

‘To live long is to see many things.’

There it is—the question that masquerades as an adage: And what of seeing? Or the question beneath the veil of the first question: And, if long lived, what of learning?

Derrida, in the grips of deathly illness: “So, to finally answer your question, no, I never learned-to-live” (2007, The Last Interview, Jean Birnbaum).

Pry closed eyes open. Eyes open underwater to the cast of moonlight; the garoupa clings tightly to its babe. How might it taste, this delicious un-beginning like bubbles frozen in dandelion honey?; how sweetly it must feel to eschew the cradle that is also the first grave. Together, in the crevasse, beneath the river moss, before the world. This life, so strange and precious, is not unfamiliar to symmetries.

Or are you not, at this very moment, awaiting a similar deliverance?

This’ll pass.
This too shall pass.
‘Has it passed?’
It passed.
It’s in the past…

All’s grist to the mill and then the world turns. 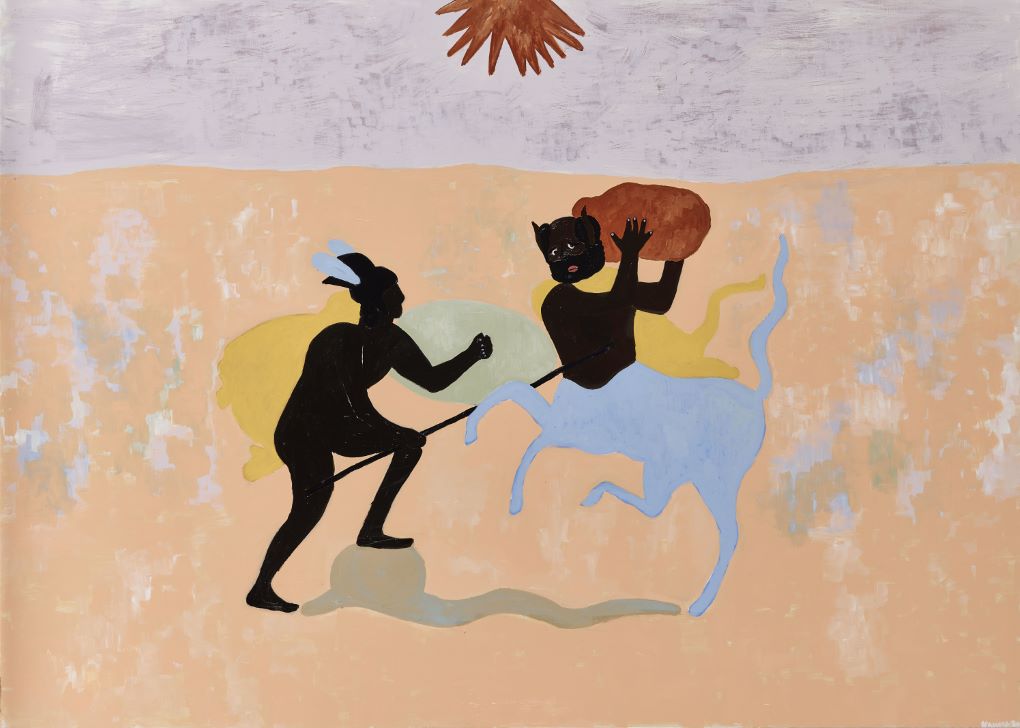 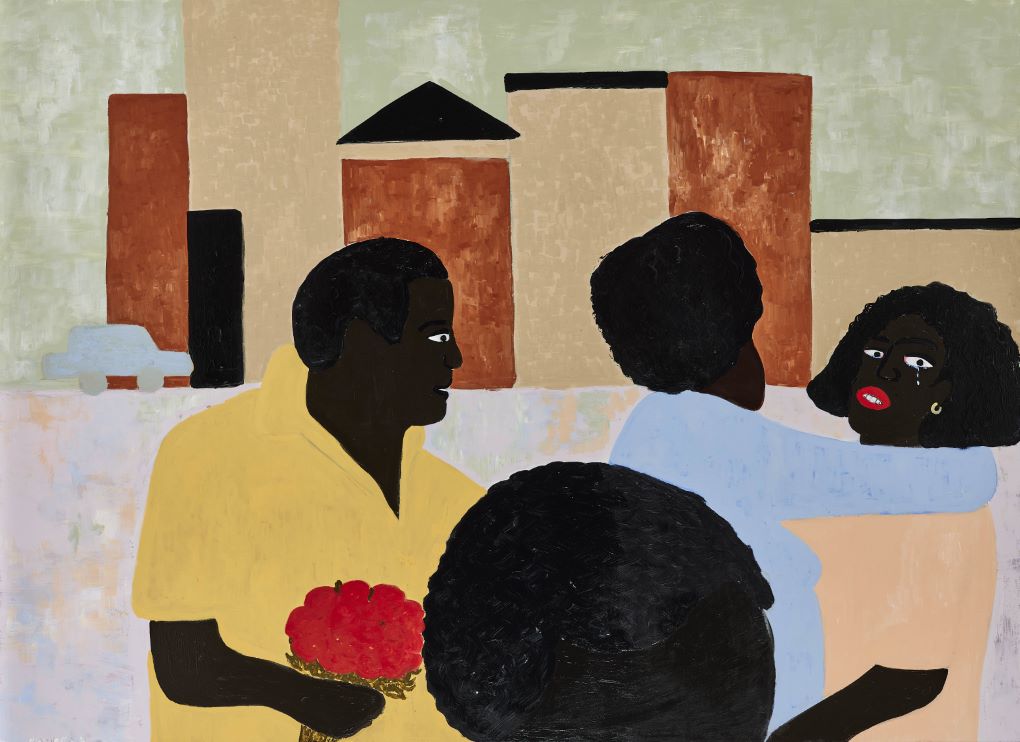 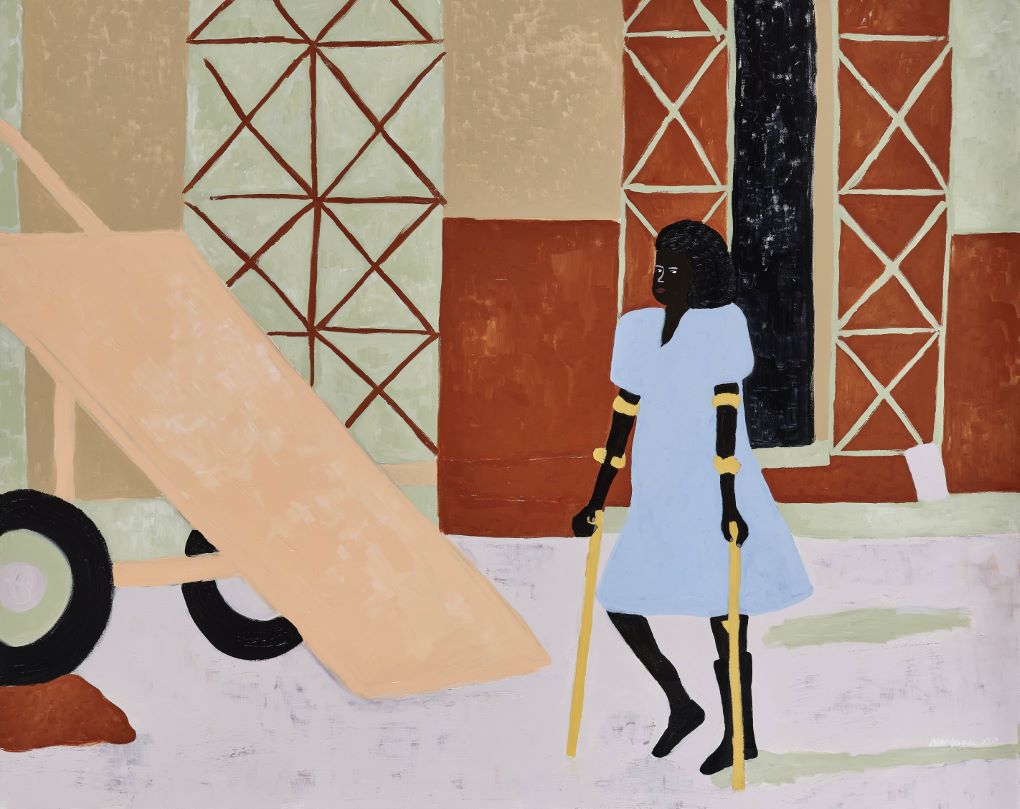 We have become strangers (Fight with a javelin and boron). An ode to Goya

One night in Beira town, one Fernando, one Afonso. Maria Joao tells Maria Ana to "let him go" at 2 a.m. but, living a novella seems practical for Maria Ana.

The joy of living, outweighs misery and sorrow 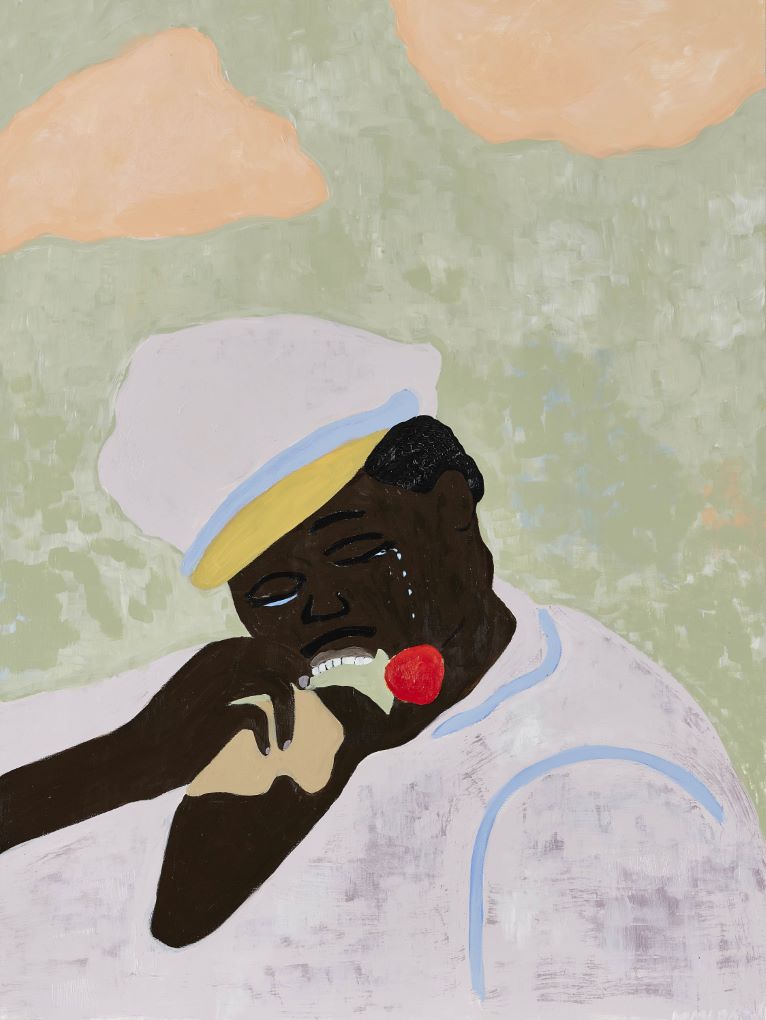 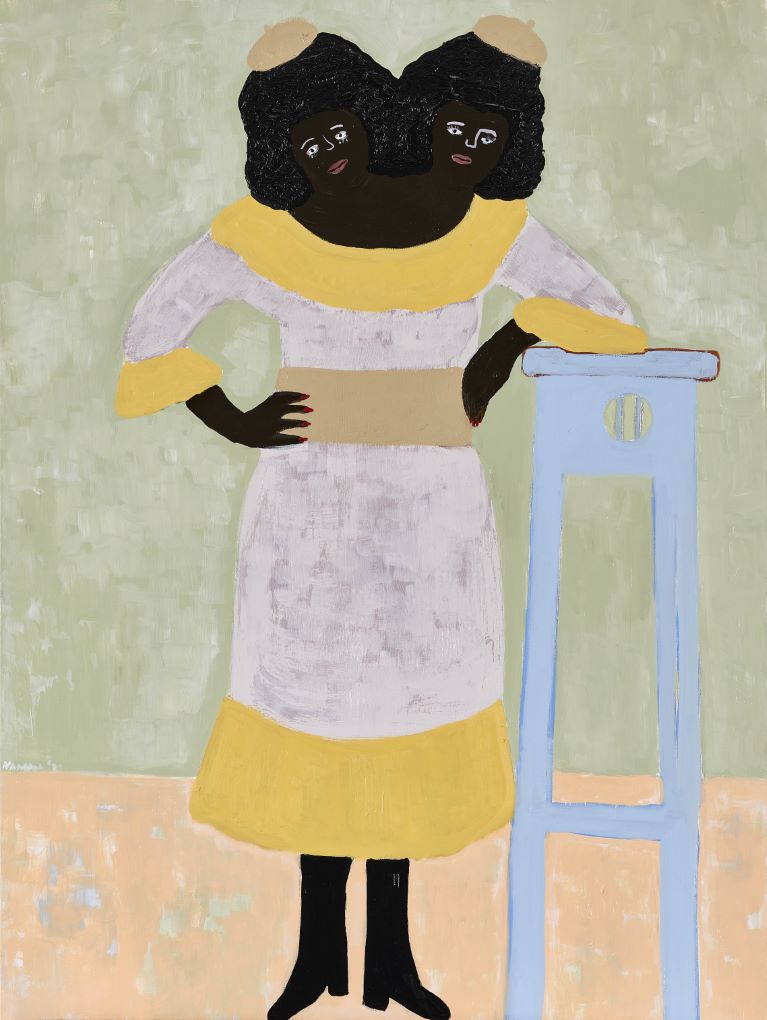 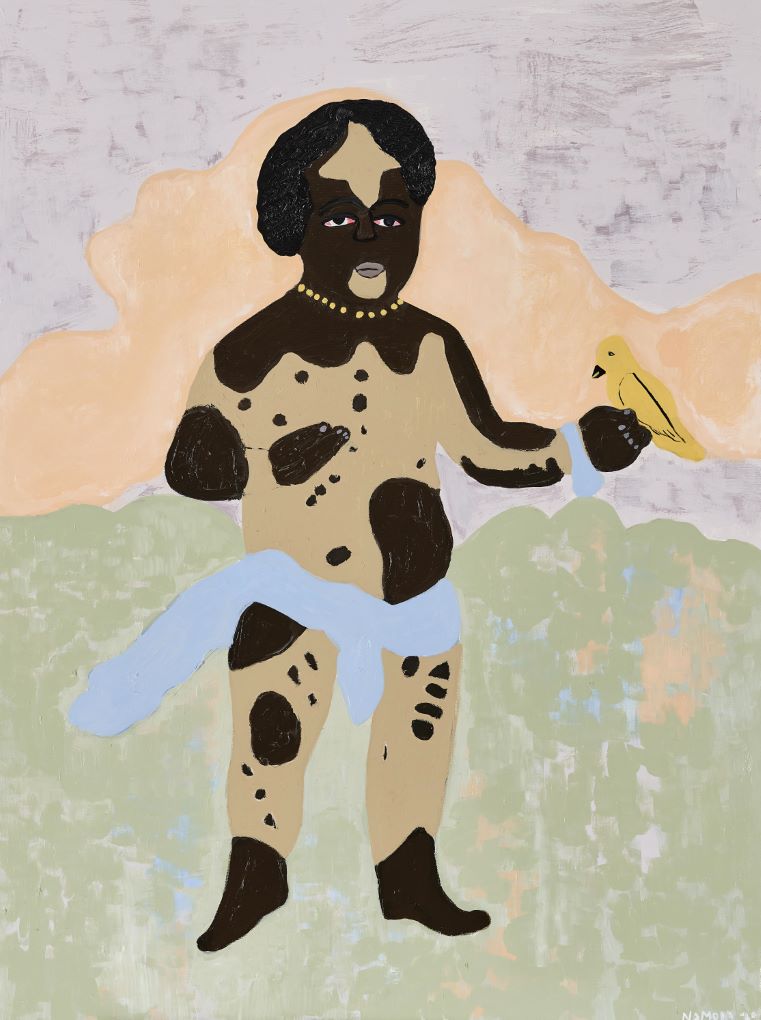 Armando from Zambezi province late to meet beloved, a tragedy

Radiant flesh of being, you are worthy of love 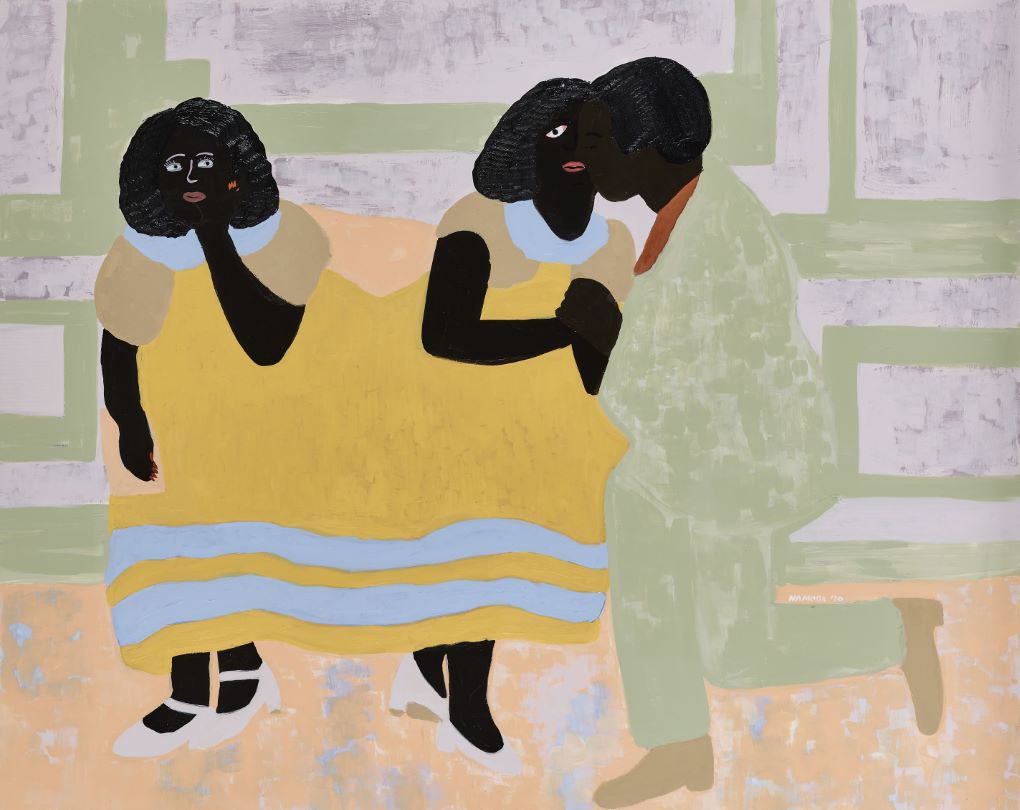 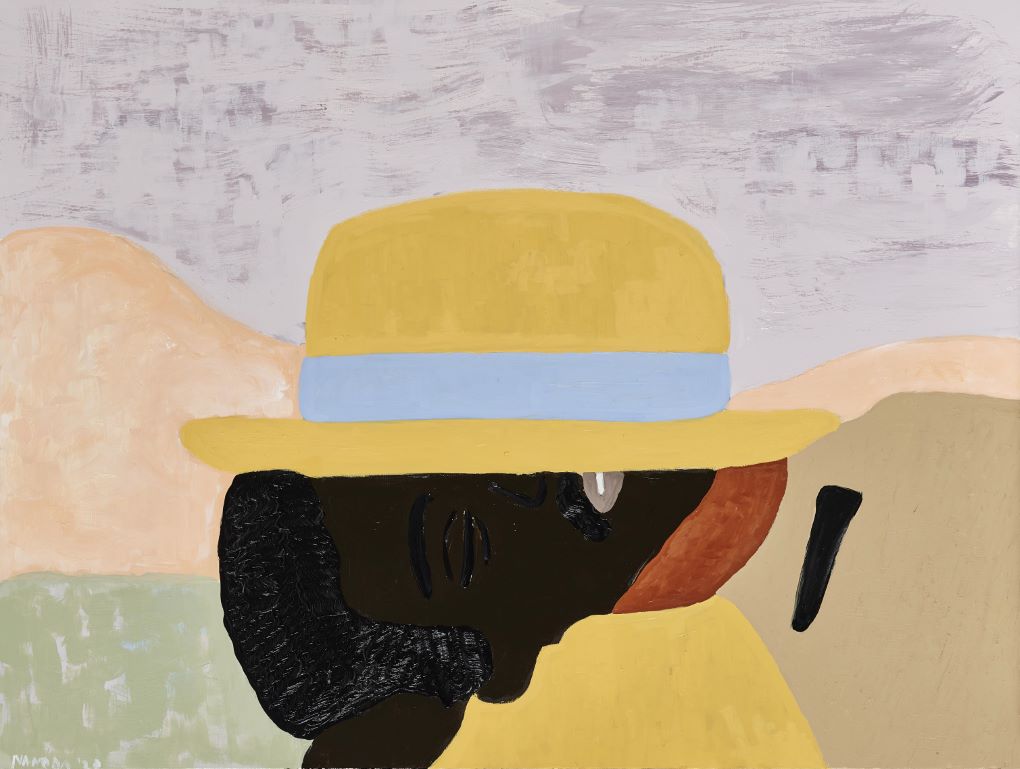 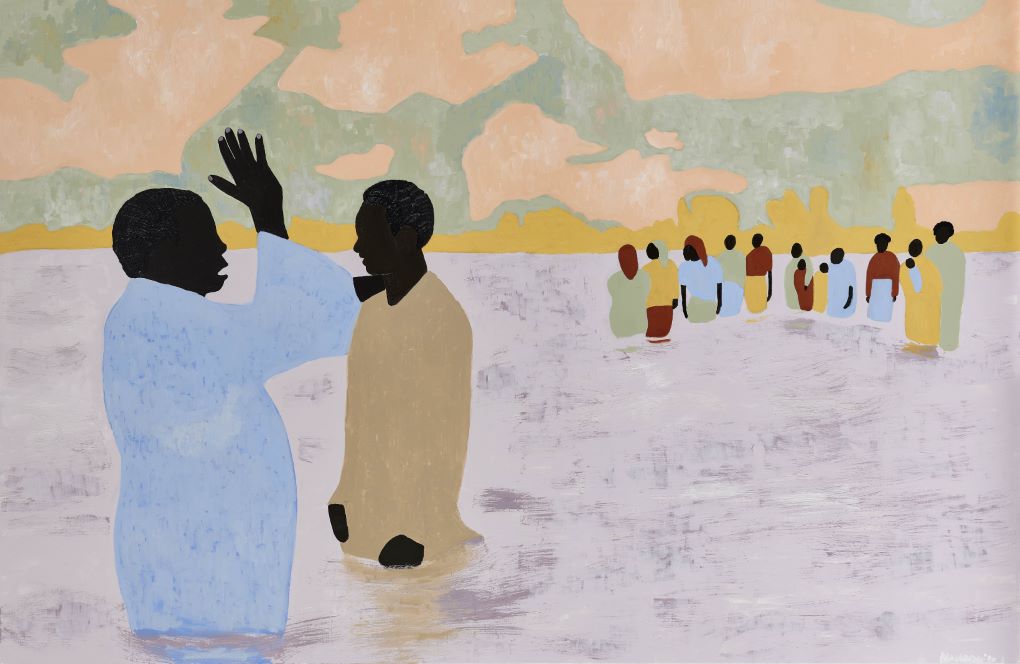 To Live Long Is To See Much (Ritual Bathers III) 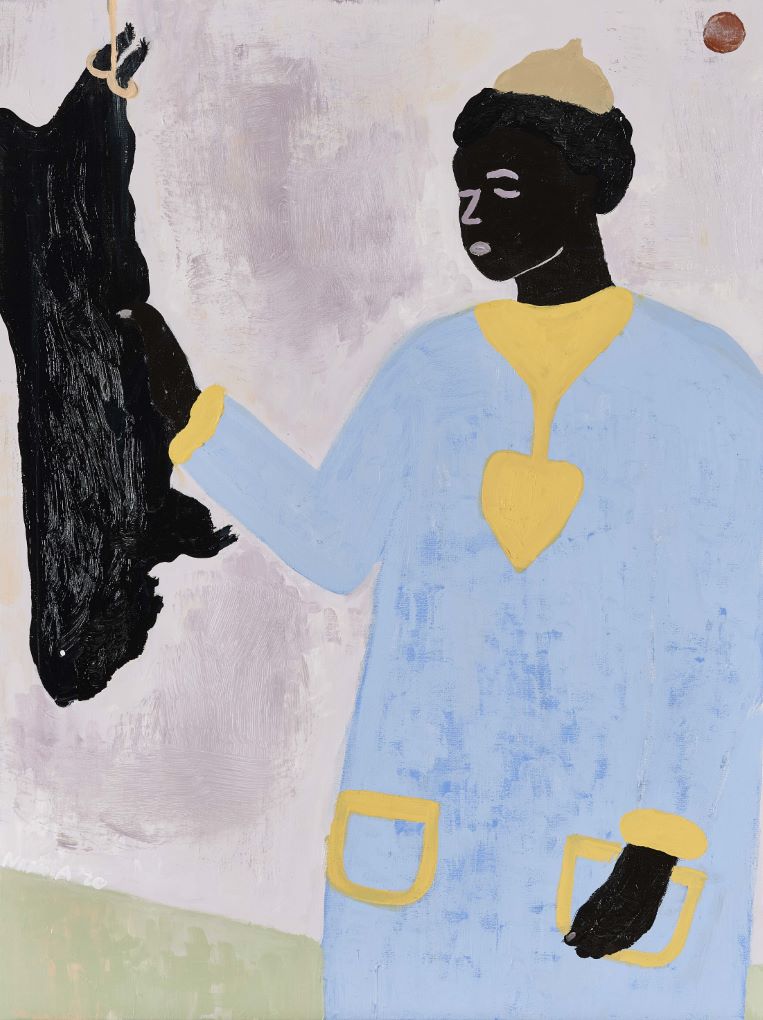 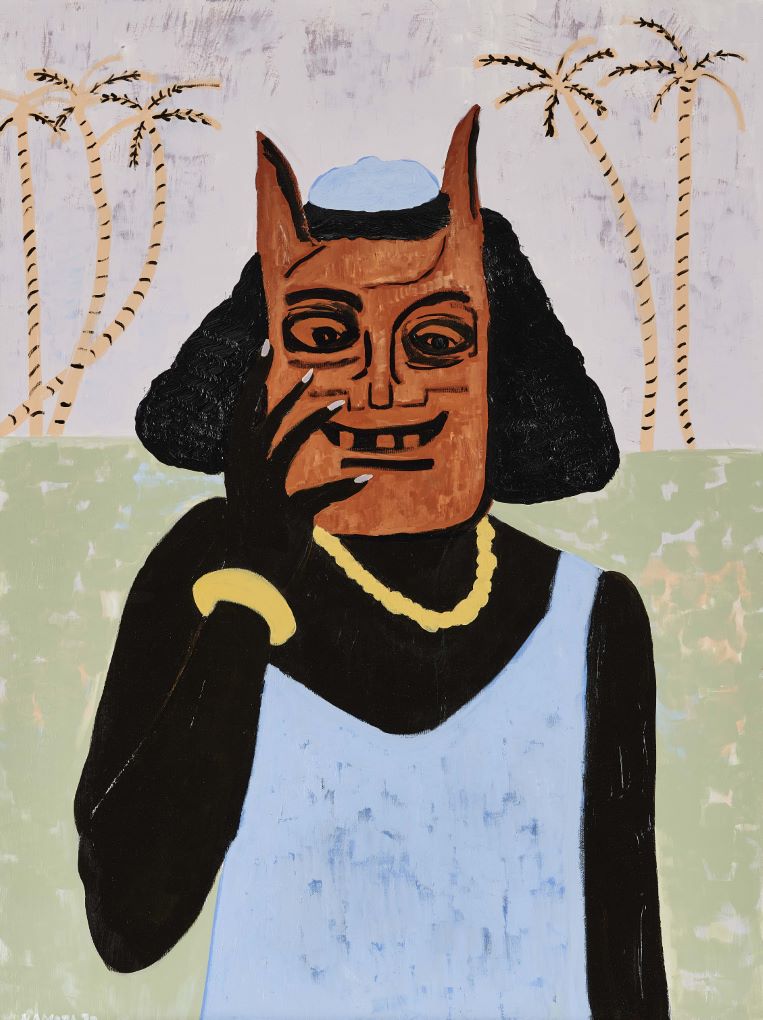 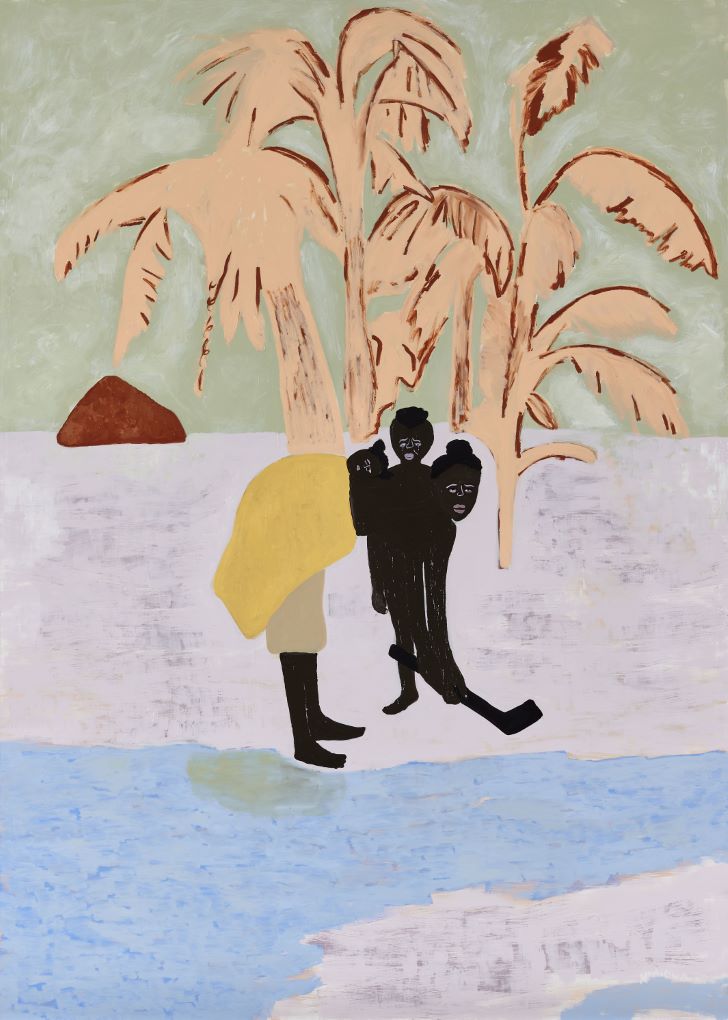 Bountiful Beast you are a feast

Sleeping daughter and the listless son graze the barren mineral earth with a surveying mother in Namacata. Within their exhale life exalts meaning onto placid ground by way of the Northern river mouth. Life is sacred. 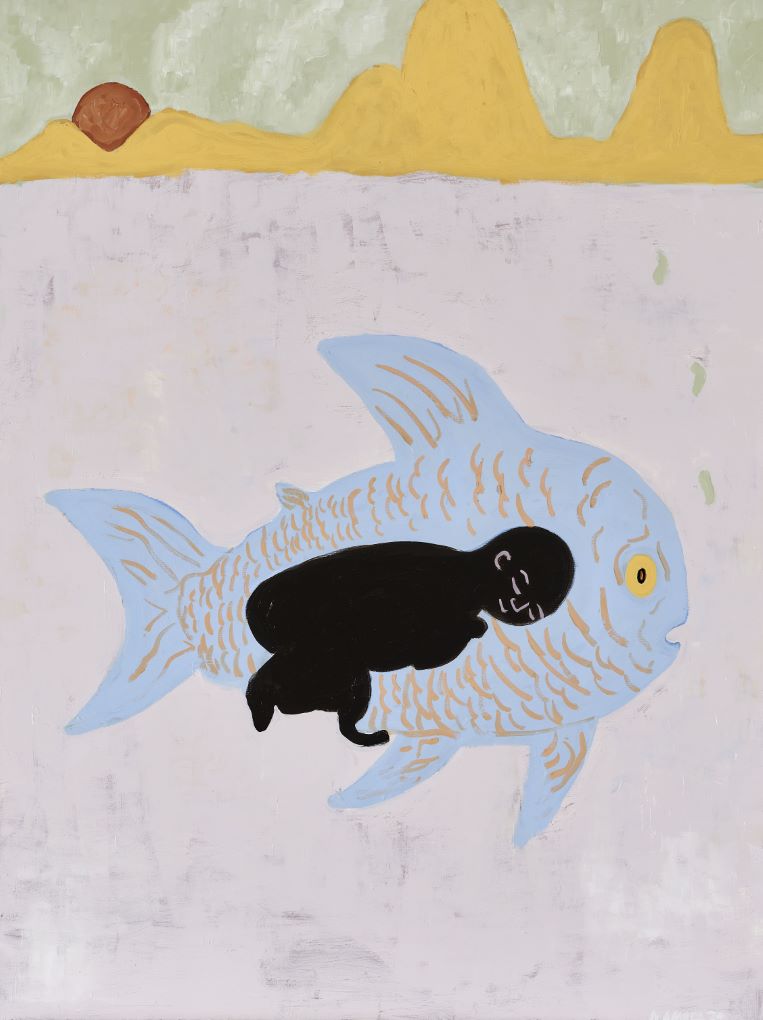 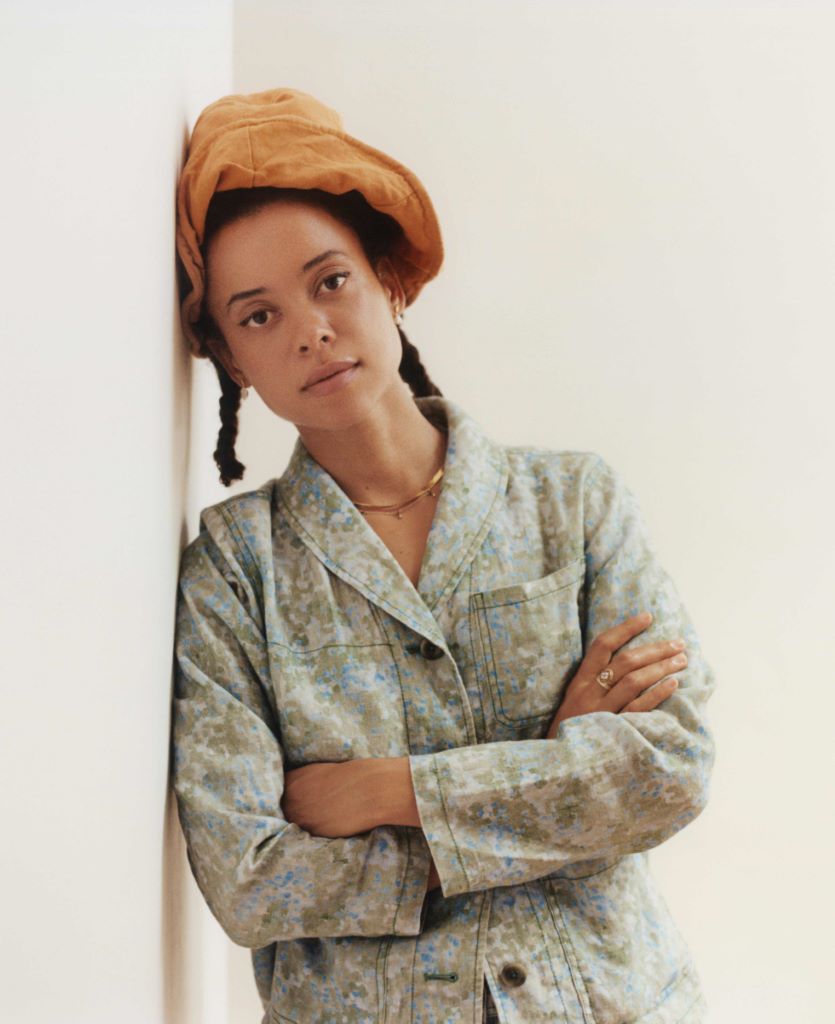 Cassi Namoda (b. 1988) is a painter whose work transfigures the cultural mythologies and historical narratives of life in post-colonial Africa, particularly those of the artist’s native Mozambique. Namoda’s paintings are highly elusive, drawing upon literary, cinematic and architectural influences that capture the expansiveness of her specifically Luso-African vantage point. The idiosyncratic subjects who appear and reappear in Namoda’s paintings also convey this hybridity: they emerge from African indigenous religions just as much as they spring from Western mythologies. Her work borrows from an art historical canon and arises from vernacular photography in equal measure. While they appear straightforward, her images are conceptually rigorous and portray figures with complex narratives. Namoda is equally attentive to landscape, creating scenes that depict both the rural and the urban through a surreal lens. Having lived in Haiti, the United States, Kenya, Benin, Uganda and other countries, Namoda has acquired a grasp of place that is at once grounded and subversive. Her landscapes resound with the features of equatorial life – blazing suns, palm trees –but they are mythic in their representation and pleasantly impeccable – mirroring the subjects that populate them.