In March and April of 2012, William Kentridge delivered a series of six lectures, the Charles Eliot Norton lectures, at Harvard University. In June The Refusal of Time, a 5-channel video installation with complex soundscape by Philip Miller and a breathing machine, was first presented at Documenta (13) in Kassel, Germany. In October the survey exhibition William Kentridge: Fortuna opened in Rio de Janeiro. In November The Refusal of Time was seen at MAXXI in Rome, and the related theatre piece Refuse the Hour was performed to sell-out audiences in both Rome and Athens.

The current exhibition of recent work at Goodman Gallery Cape, the first in Cape Town for five years, sets elements from these projects together with new work made especially for the exhibition – allowing the gallery to be the space where different bodies of work collide and make new connections.

The flipbook, NO, IT IS, designed by Fourthwall and co-published with the Goodman Gallery, was the start of a new project of making flipbooks and flipbook films. Both book and films are seen for the first time in this exhibition.

A special edition of the flipbook NO, IT IS comes with an original drawing of one of the pages made for the book.

A selection of pages used in making both book and films are choreographed into panels of between two and fifty drawings each.

Rubrics, a series of red silkscreened texts, punctuate the room. The phrases were both prods for and are remnants of the series of six Norton lectures presented at Harvard University, and were printed at Artist Proof Studio in Johannesburg.

A series of large drawings of trees in Indian ink analyse the form of different trees indigenous to southern Africa. Drawn across multiple pages from books, each drawing is put together as a puzzle – the single pages first painted, then the whole pieced together.

The ink brush mark is picked up in selected prints from a series of recent linocuts made at David Krut Workshop in Johannesburg, Universal Archive. Each print was made first as an ink drawing on paper; the image was transferred to lino and then cut, the fluid mark of brush and ink translating into the medium of linocut.

Four collage lithographs of typewriters, similarly derived from ink drawings, were printed by The Artists’ Press in White River, as were a series of smaller stone lithographs.

The two Colour Chart prints, also a translation from ink drawings, were printed by the Artist Proof Studio in Johannesburg.

THE SINGER & OTHER MOVING SCULPTURES

A company of kinetic sculptures have their origins in the project The Refusal of Time, and were constructed from megaphones, bicycle wheels, sewing machines, bellows, tripods, drums. A Singer sewing machine performs music composed by Philip Miller, as does a rack of drums, with software design and circuitry for both done by Janus Fouché. Design and construction of machines by Christoff Wolmarans and Chris-Waldo de Wet.

Four small bronze sculptures cast at Workhorse Bronze Foundry in Johannesburg fragment and gather form as they are viewed from different angles.

A limited edition vinyl of Philip Miller’s musical soundscape for The Refusal of Time comes accompanied by an ink drawing by William Kentridge, and is presented in a box designed and made by Lunetta Bartz.

There are five publications from the past year available at the gallery:

NO, IT IS, a flipbook published by Fourthwall Books, Johannesburg, and Goodman Gallery (also in a special edition)

The Refusal of Time, a document of the creative process for the project of the same name, published by Xavier Barral, Paris

William Kentridge: Fortuna, edited by Lilian Tone, the catalogue of an exhibition that opened in Rio de Janeiro in October 2012 (text in Portuguese)

A Universal Archive: William Kentridge as Printmaker, the catalogue of a substantial prints exhibition touring institutions in the UK, Hayward Publishing, London 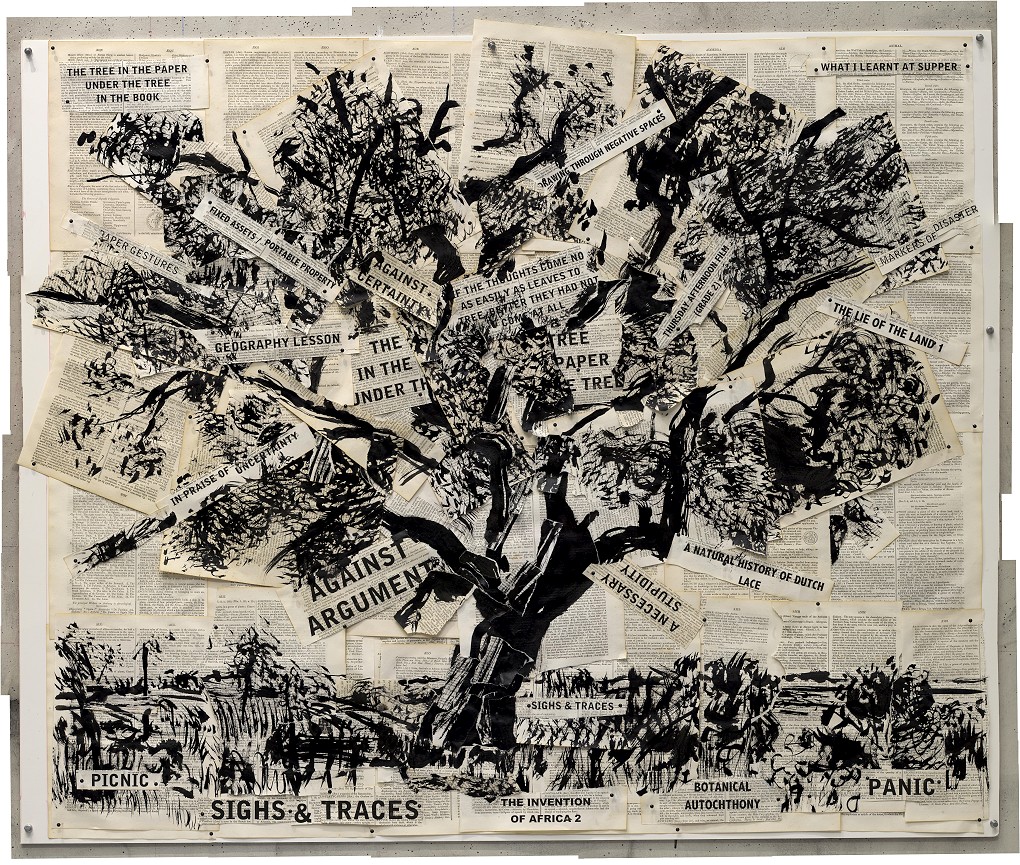 No, IT IS- Triptych of three flipbook flims: Workshop Receipts, The Anatomy of Melancholy, Practical Enquiries

Against Argument (But not this one) 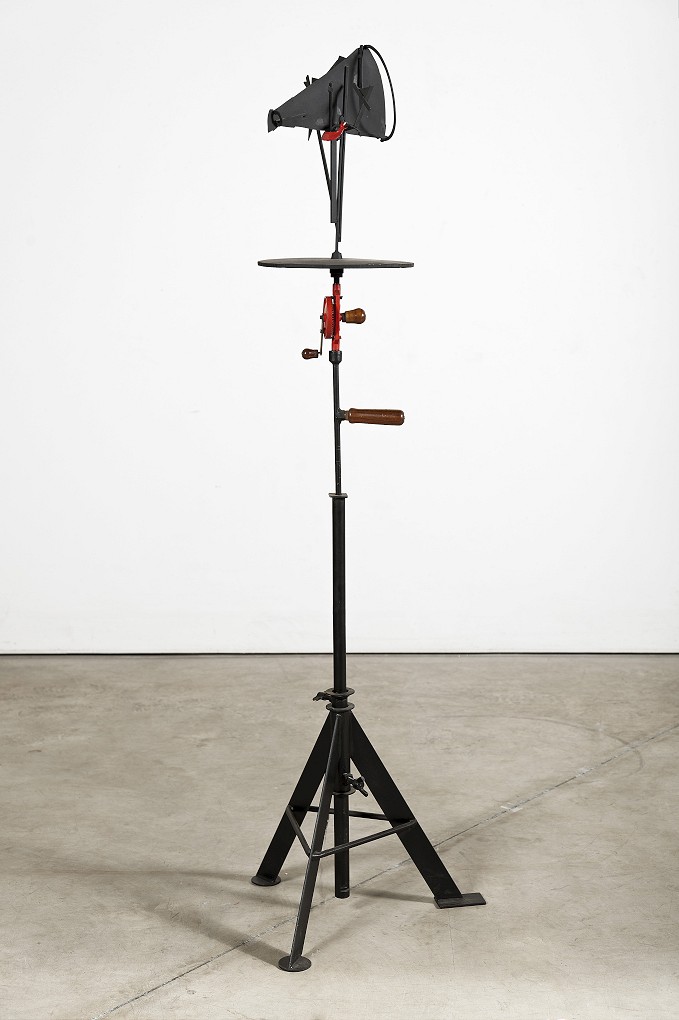 The Full stop Swallows the Sentence

Looking at the Sun

Leap Before You Look

The Pleasures of Self Deception

Poems I Used To Know 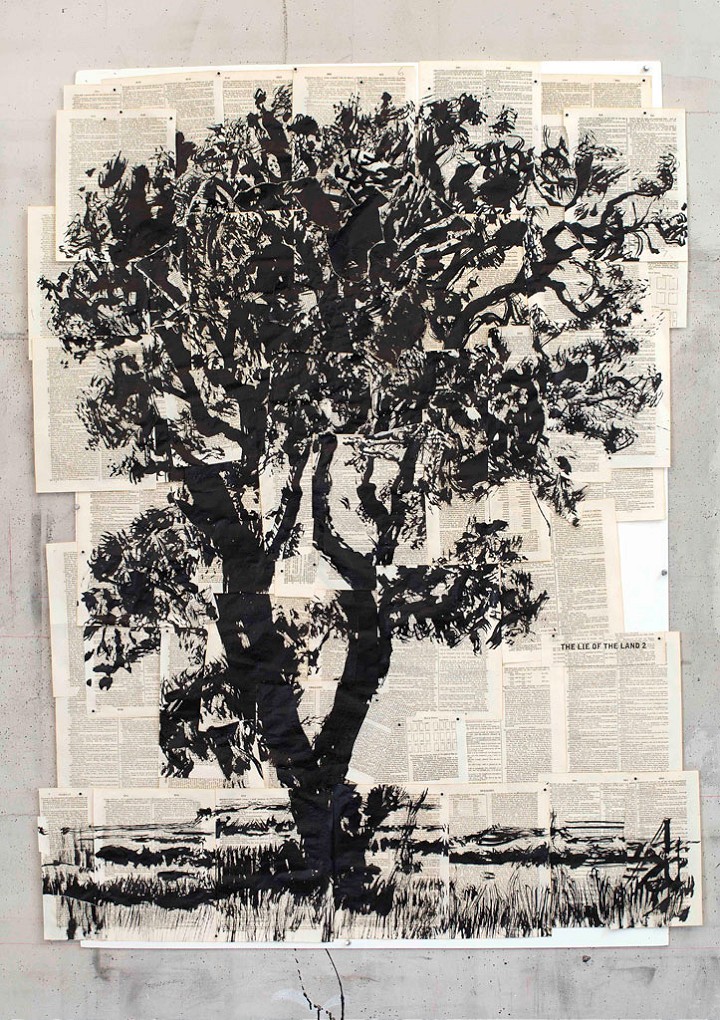 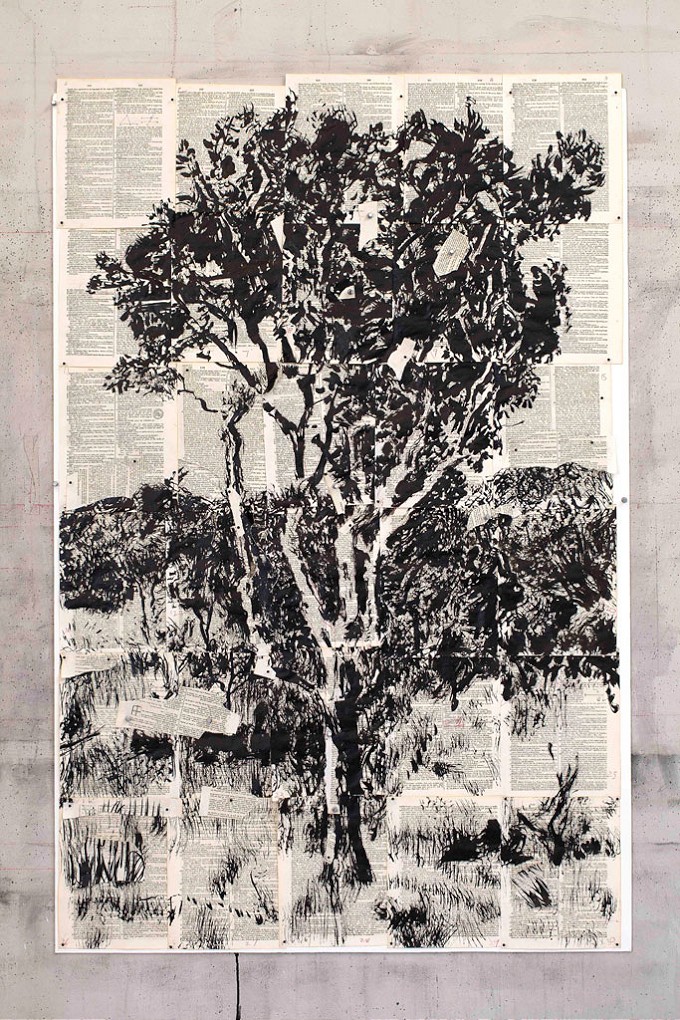 A Safe Space for Stupidity

Lie of the Land 2 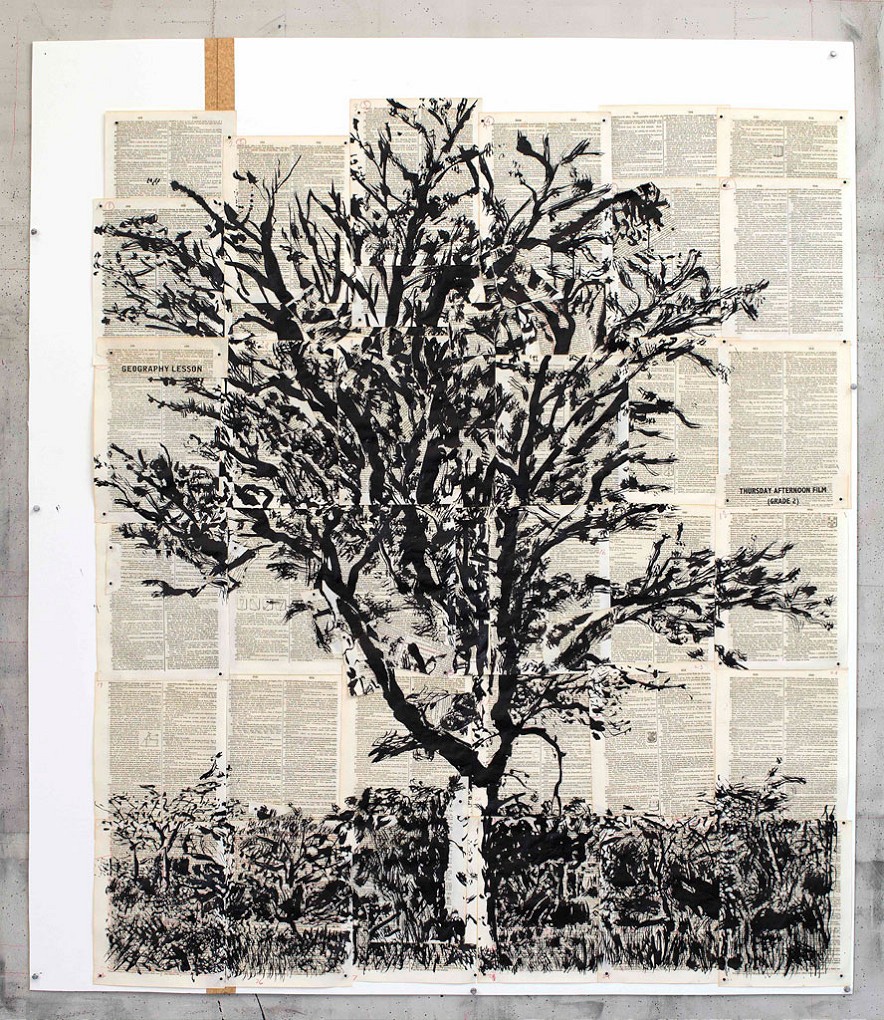 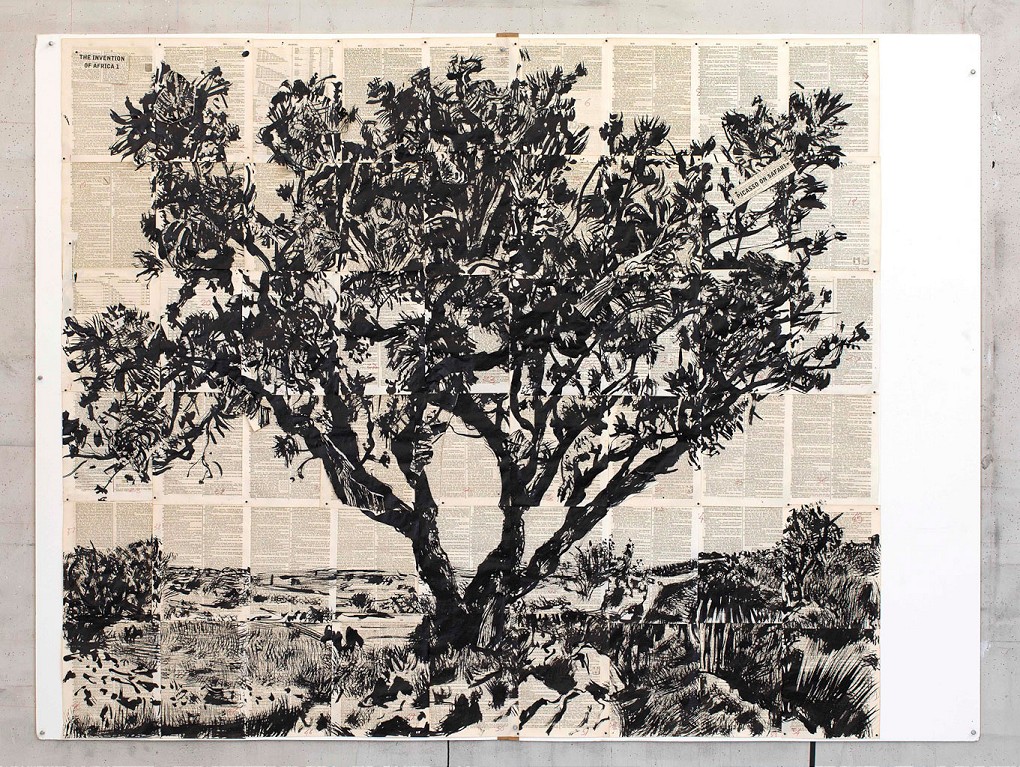 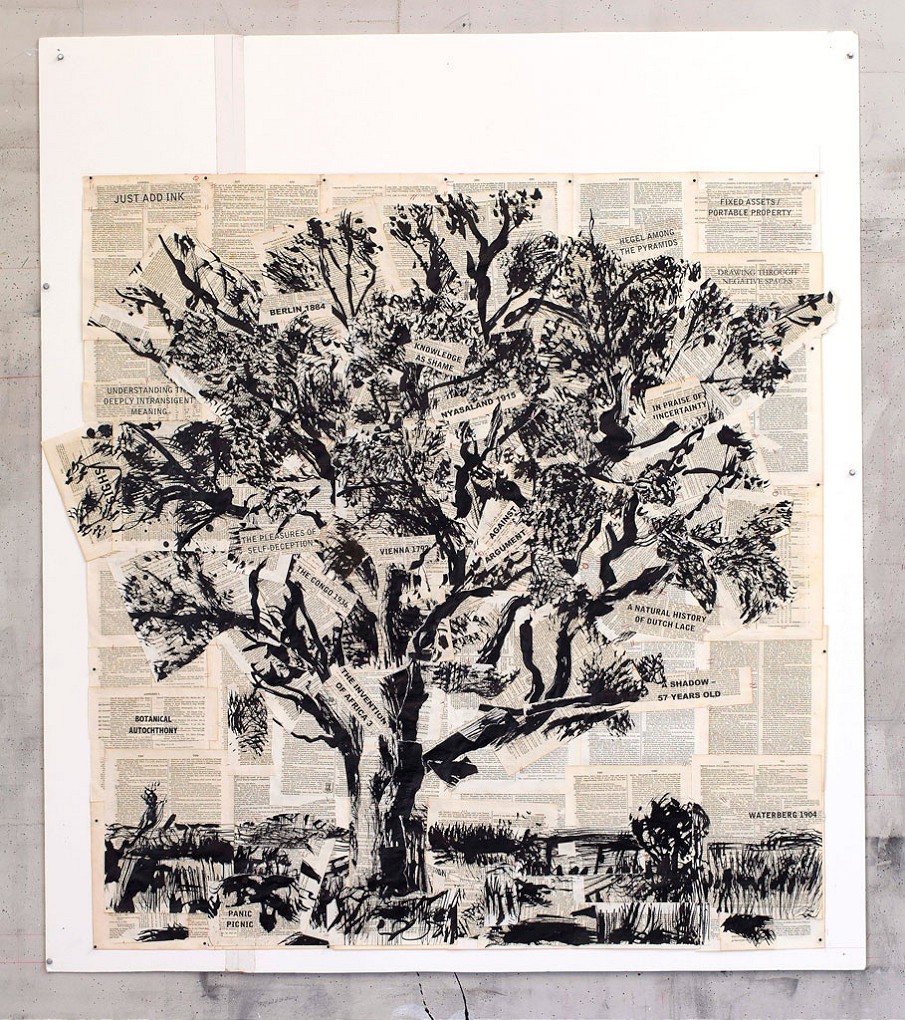 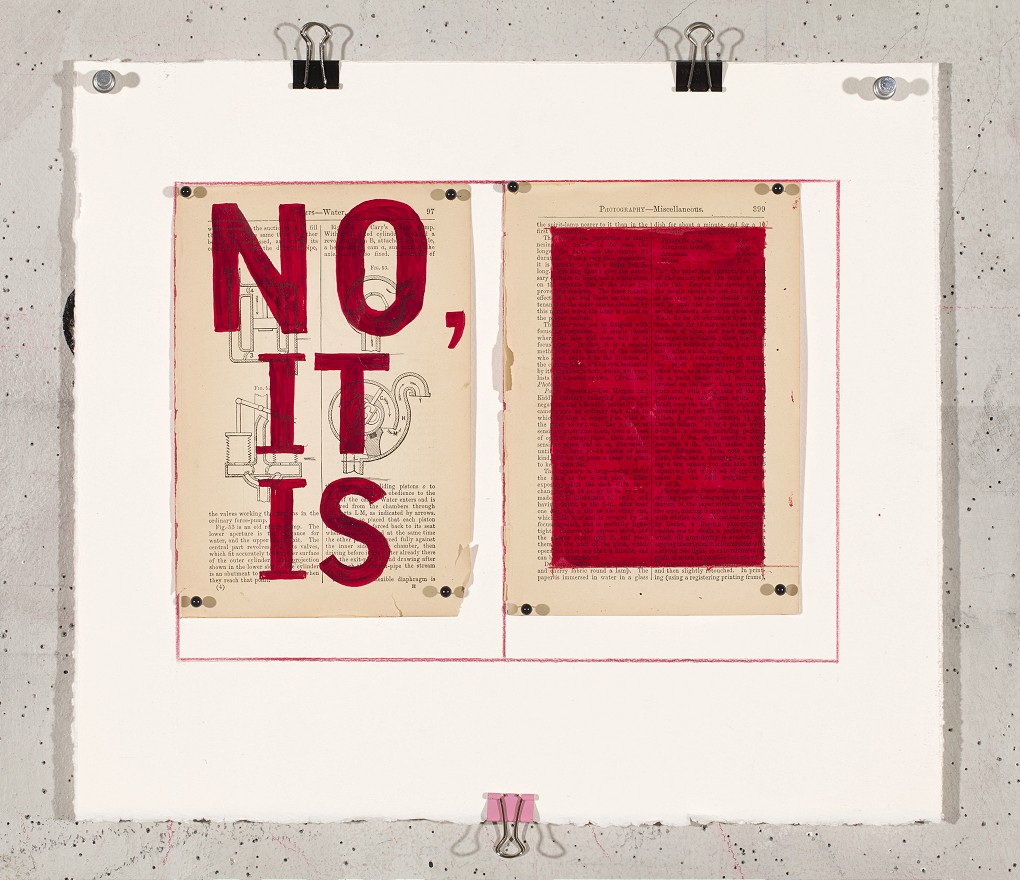 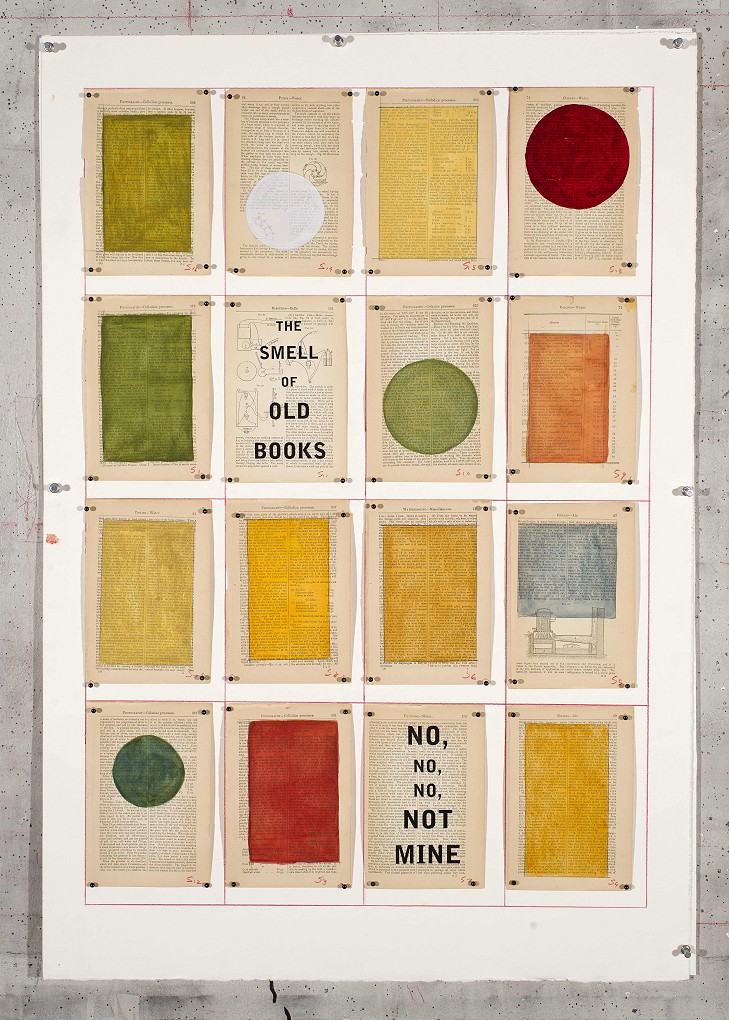 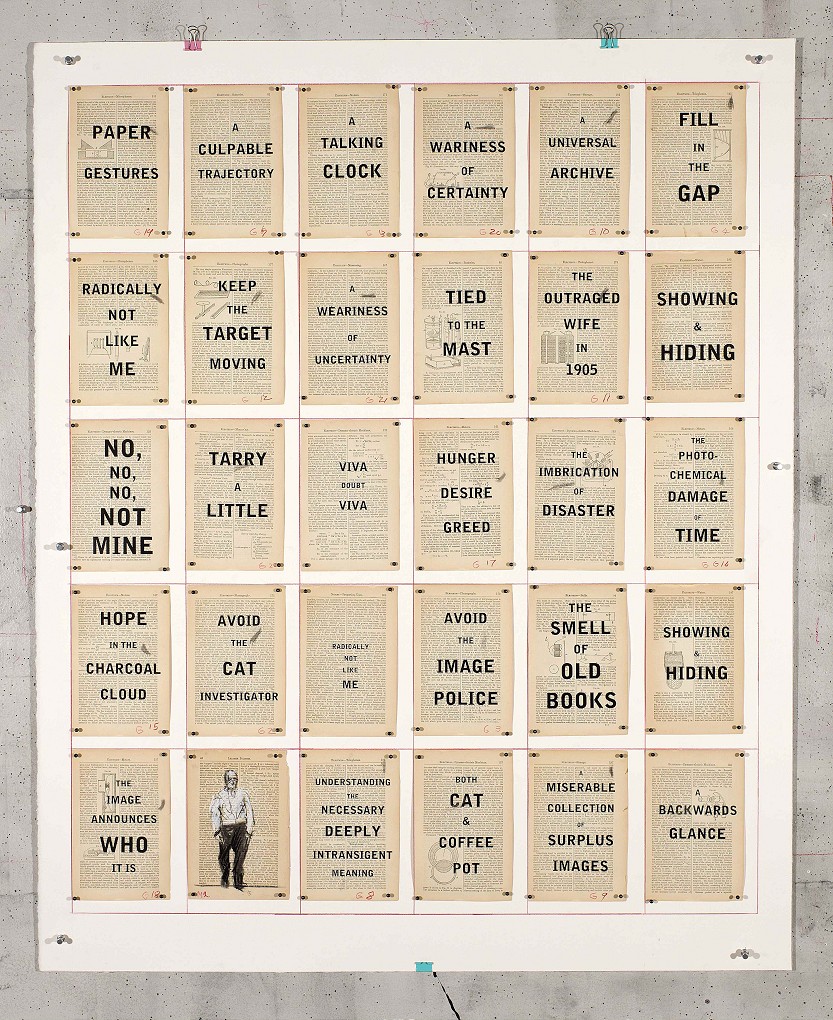 The Smell of Old Books 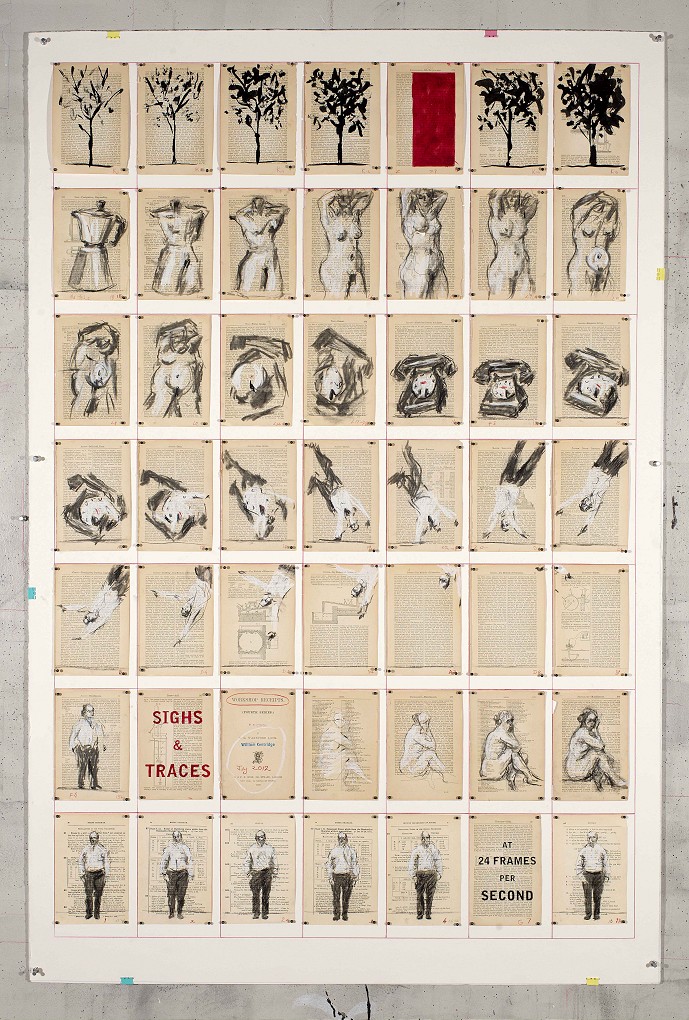 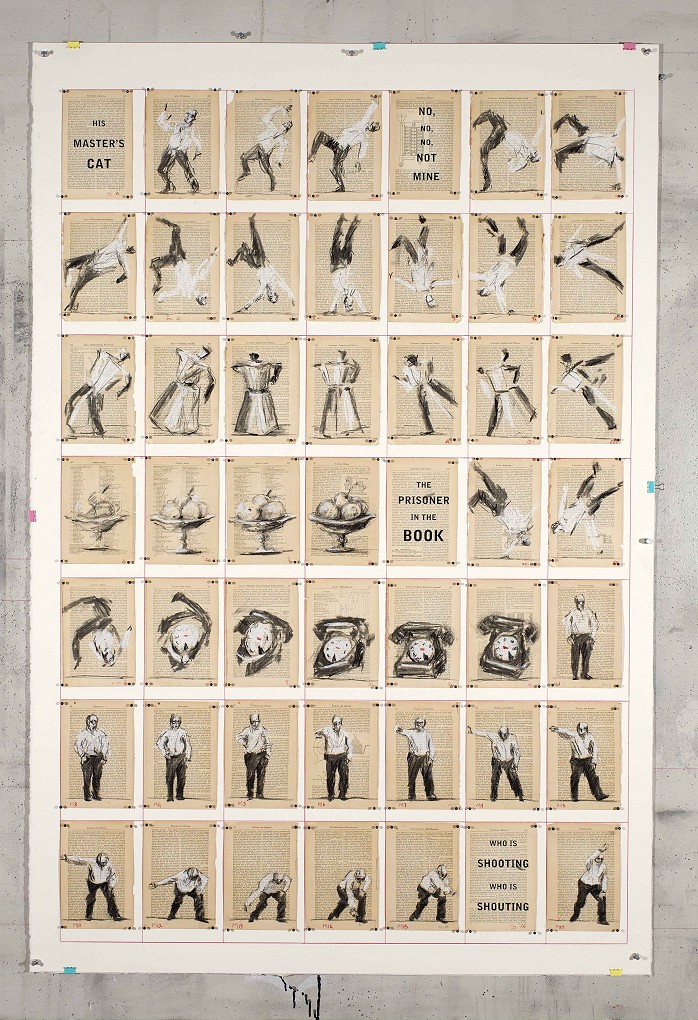 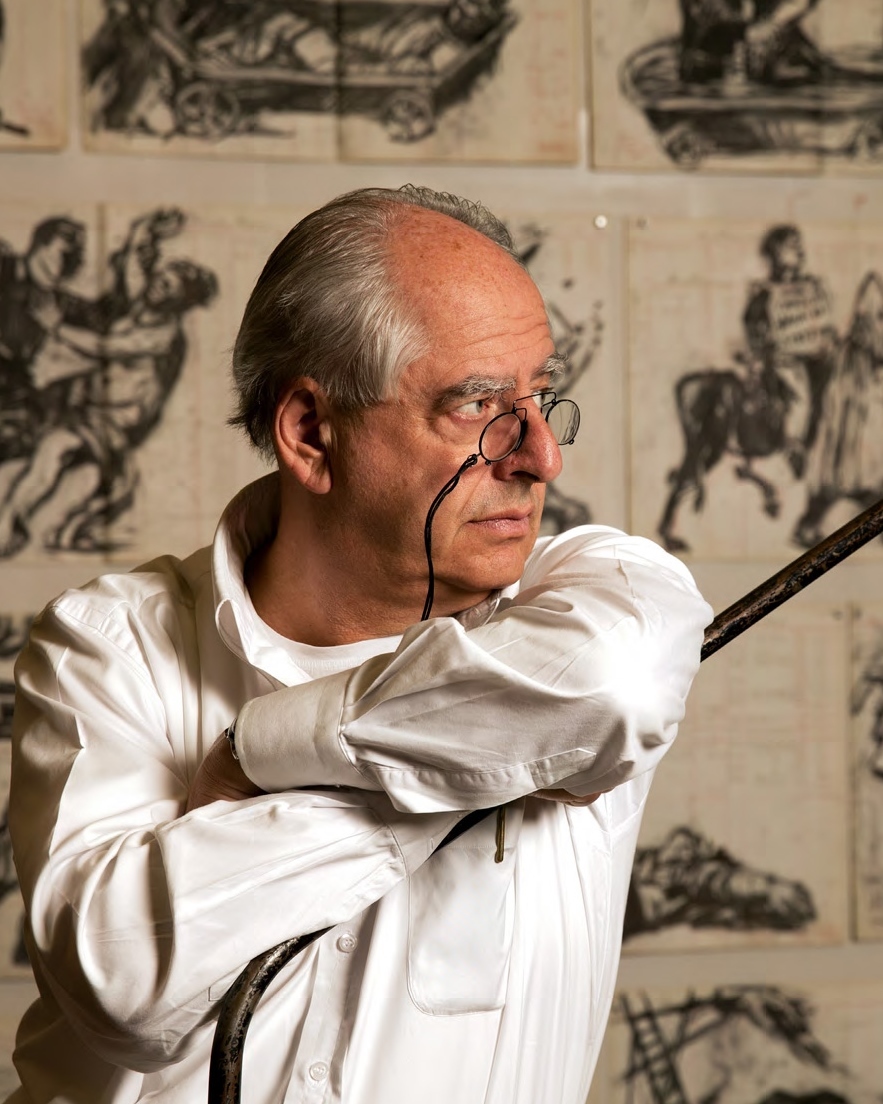 William Kentridge’s work has been seen in museums and galleries around the world since the 1990s, including Documenta in Kassel, Germany (1997, 2003, 2012), the Museum of Modern Art in New York (1998, 2010), the Albertina Museum in Vienna (2010), Jeu de Paume in Paris (2010), and the Musée du Louvre in Paris (2010), where he presented Carnets d’Egypte, a project conceived especially for the Egyptian Room. Kentridge’s production of Mozart’s The Magic Flute was presented at Theatre de la Monnaie in Brussels, Festival d’Aix, and in 2011 at La Scala in Milan, and his production of Shostakovich’s The Nose was seen at The New York Metropolitan Opera in 2010 and again in 2013, travelling to Festival d’Aix and to Lyon in 2011. The five-channel video and sound installation The Refusal of Time was made for Documenta (13) in Kassel, Germany, in 2012; since then it has been seen at MAXXI in Rome, the Metropolitan Museum, New York, and other cities including Boston, Perth, Kyoto, Helsinki and Wellington. A substantial survey exhibition of Kentridge’s work opened in Rio de Janeiro in 2012, going on in following years to Porto Alegre, São Paulo, Bogota, Medellin, and Mexico City. In the summer of 2014 Kentridge’s production of Schubert’s Winterreise opened at the Vienna Festival, Festival d’Aix, and Holland Festival. In the fall it opened at the Lincoln Center in New York. Paper Music, a concert of projections with live music by Philip Miller, opened in Florence in September 2014, and was presented at Carnegie Hall in New York in late October 2014. Both the installation The Refusal of Time and its companion performance piece Refuse the Hour were presented in Cape Town in February 2015. More recently, Kentridge’s production of the Alban Berg opera Wozzeck premiered at the Salzburg Festival in 2017, and last year his acclaimed performance project The Head & The Load opened at Tate Modern in London, and travelled to Park Avenue Armory in December 2018. In June 2019, A Poem That I Used To Know opened at Kunstmuseum, Basel in Switzerland. This comprehensive survey show includes early drawings, major film installations, sculpture and two new pieces, an installation and a film, produced by Kentridge in response to works in the museum’s permanent collection.

In 2010, Kentridge received the prestigious Kyoto Prize in recognition of his contributions in the field of arts and philosophy. In 2011, he was elected as an Honorary Member of the American Academy of Arts and Letters, and received the degree of Doctor of Literature honoris causa from the University of London. In 2012, Kentridge presented the Charles Eliot Norton Lectures at Harvard University and was elected member of the American Philosophical Society and of the American Academy of Arts and Sciences. Also in that year, he was awarded the Dan David Prize by Tel Aviv University, and was named as Commandeur des Arts et Lettres by the French Ministry of Culture and Communication. In 2013, William Kentridge was awarded an Honorary Doctorate in Fine Arts by Yale University and in 2014 received an Honorary Doctorate from the University of Cape Town.

Why Should I Hesitate, a major survey show, divided across the Norval Foundation and Zetiz MOCAA, opened in late August 2019 and will run until July 2020. In addition, Kentridge’s new opera project, Waiting for the Sibyl, premiered at Teatro dell’Opera di Roma in September 2019. Waiting for the Sibyl was created in response to Alexander Calder’s Work in Progress. Most recently, Kentridge’s production of Alban Berg opera Wozzeck ran at the Metropolitan Opera in New York.