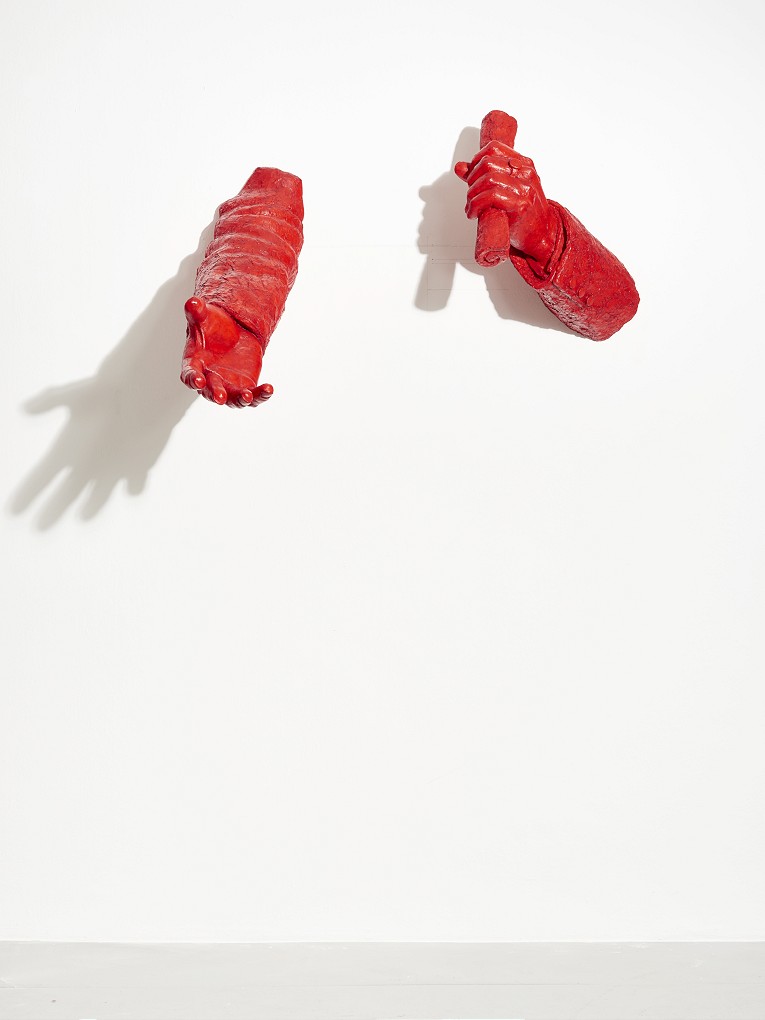 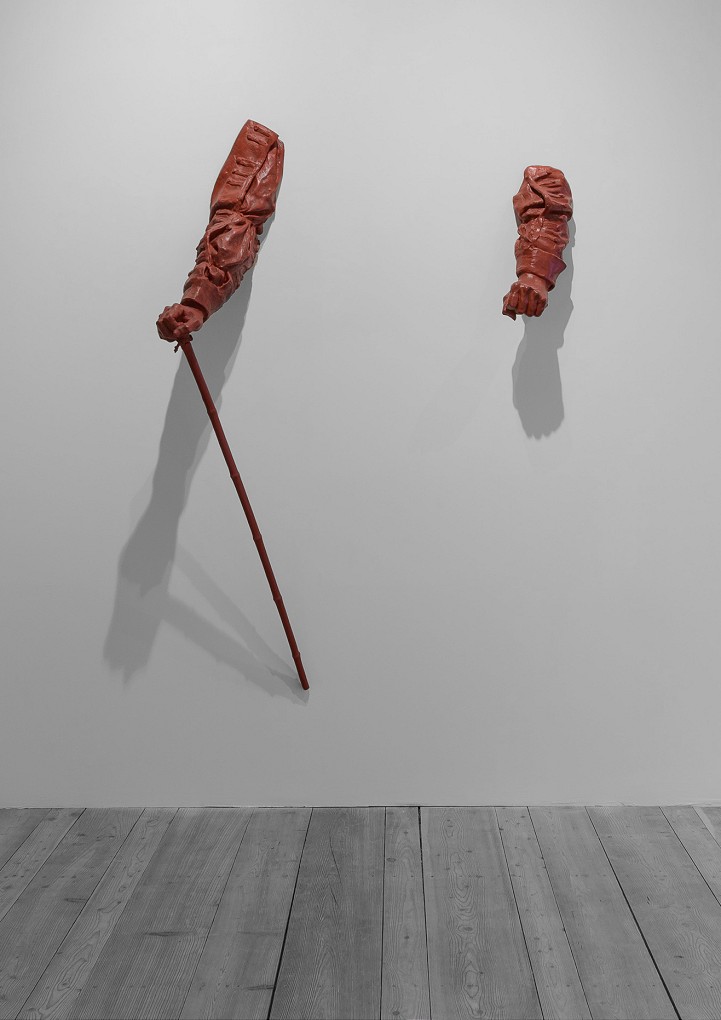 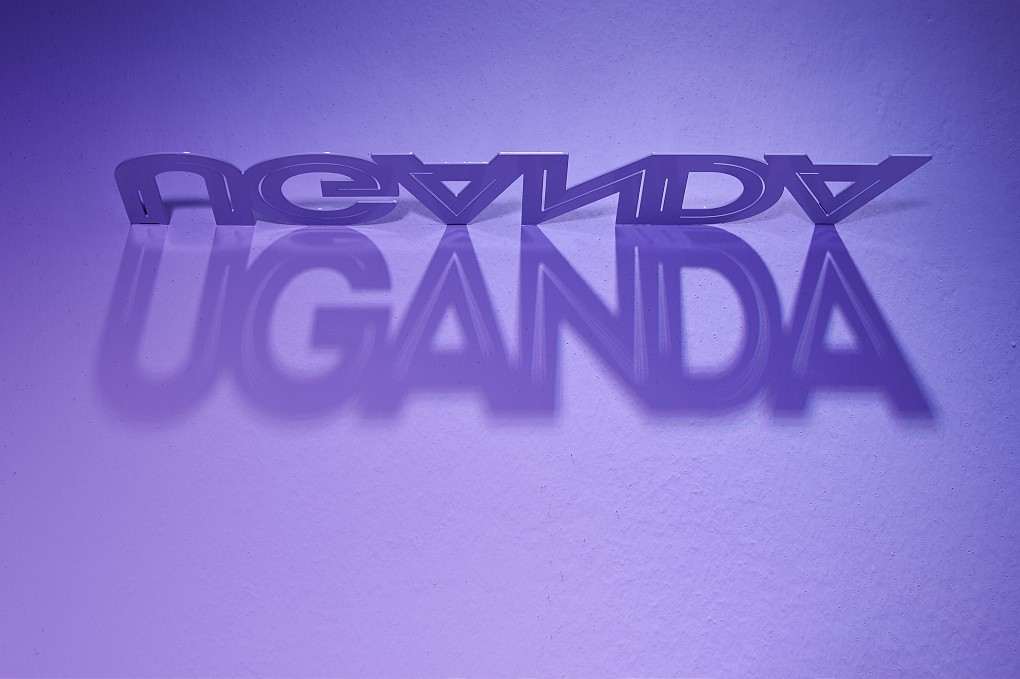 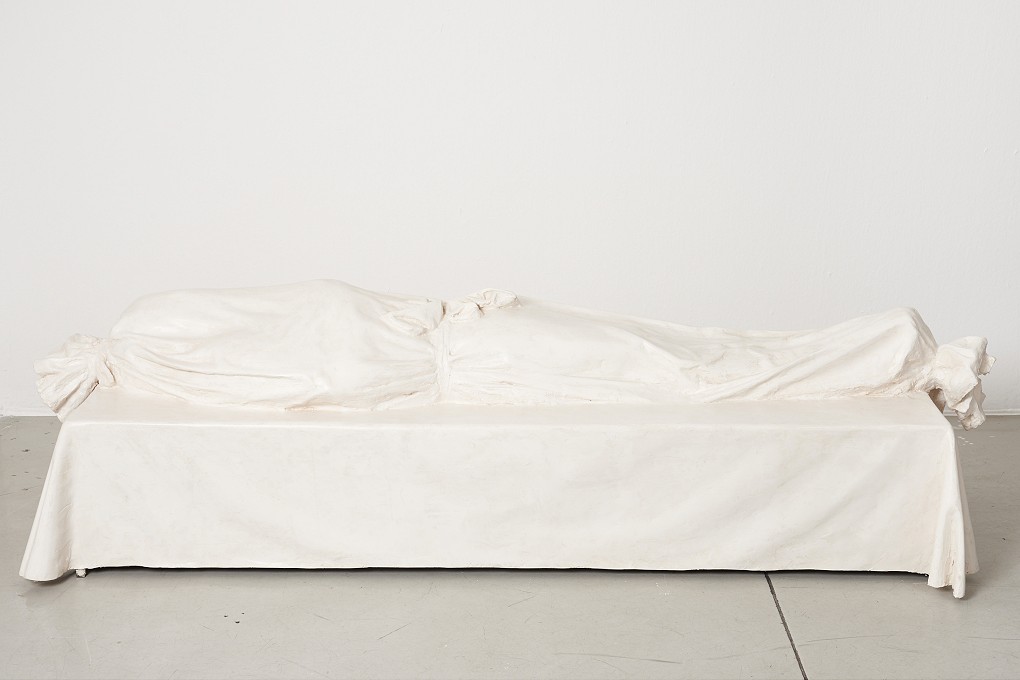 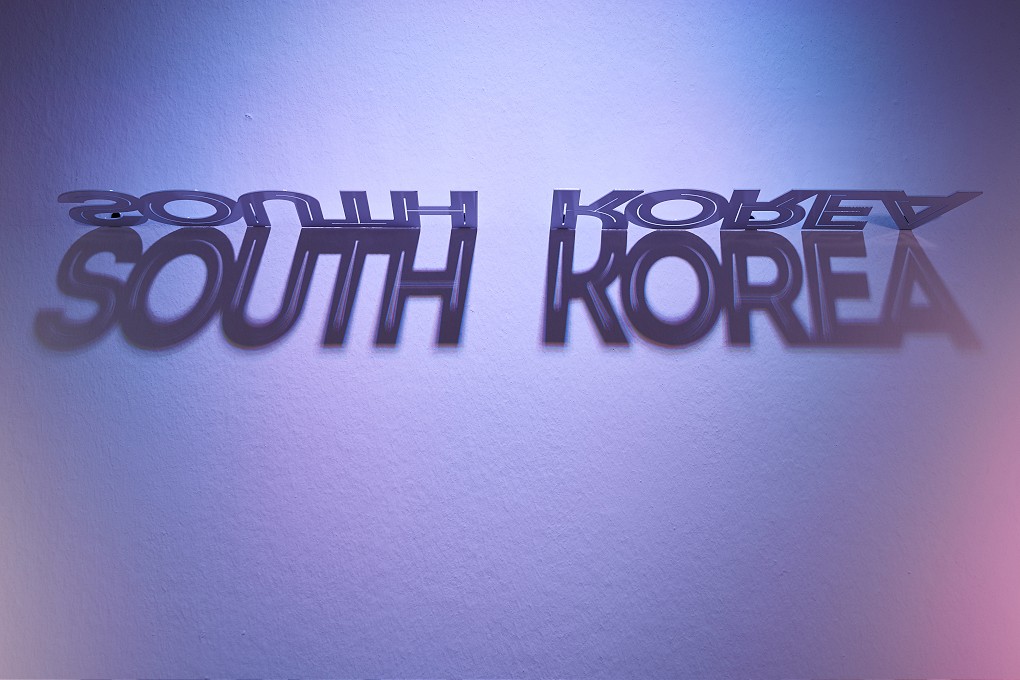 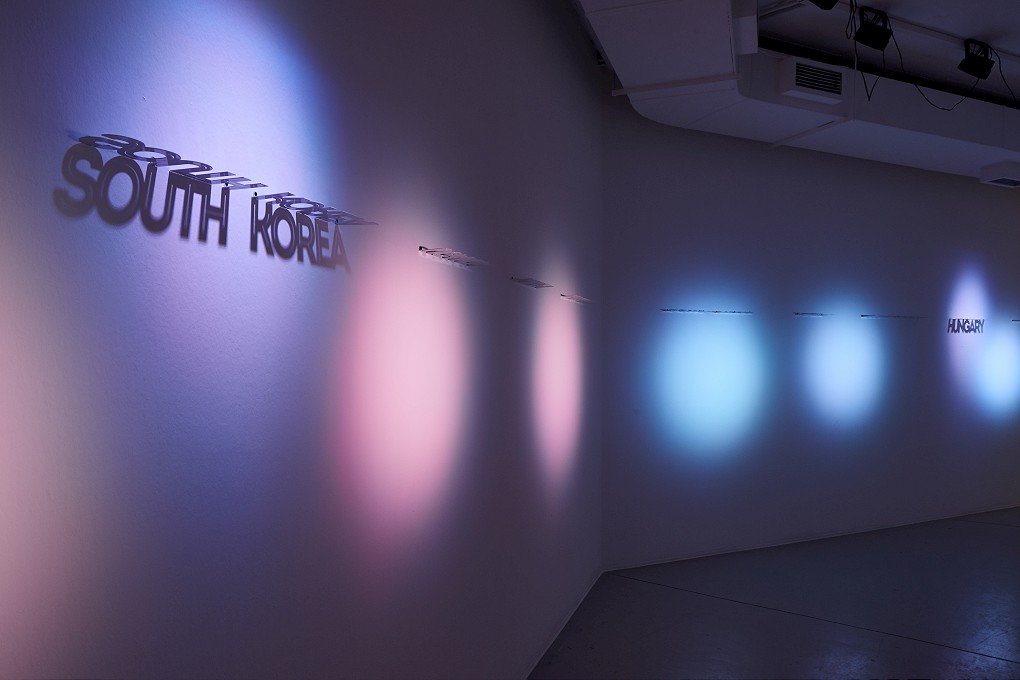 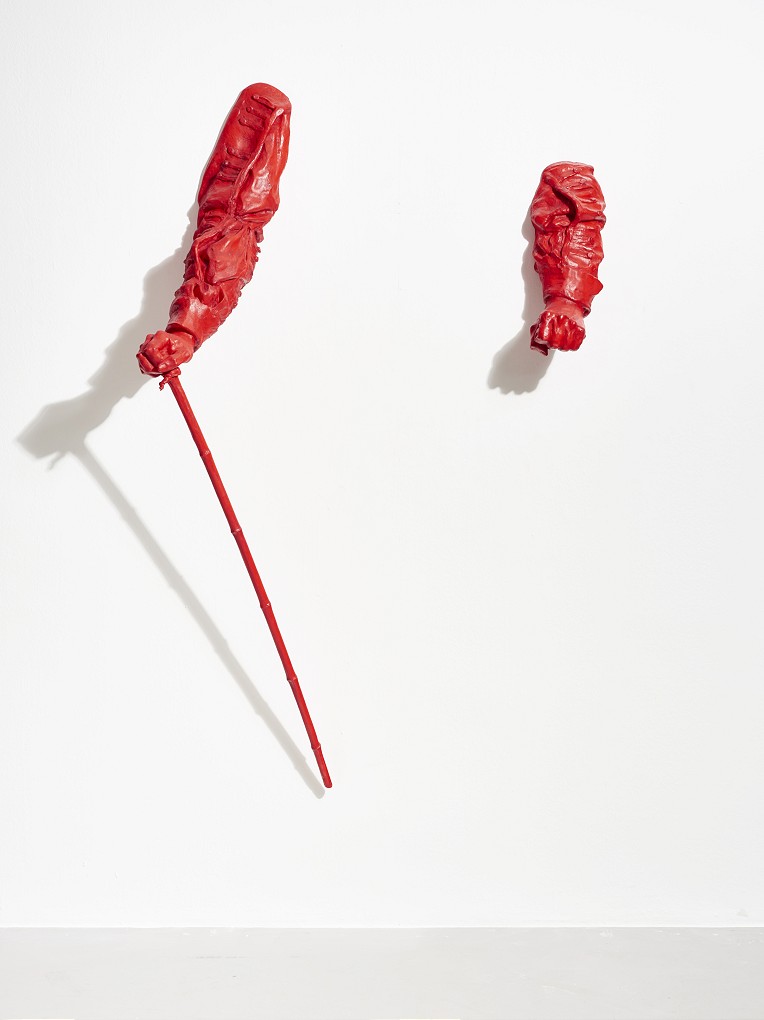 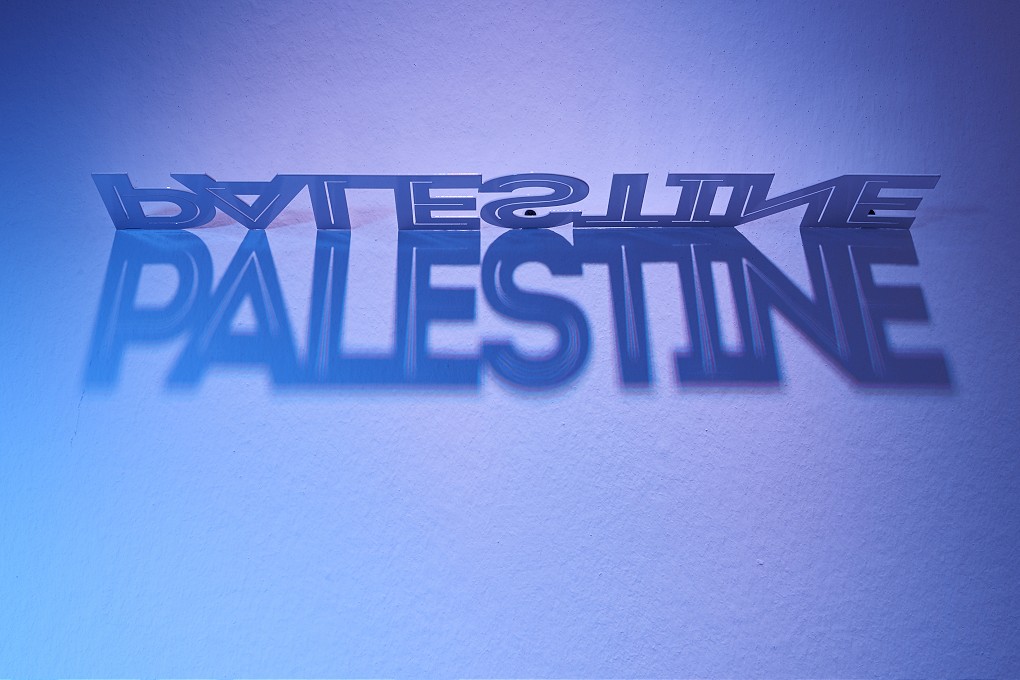 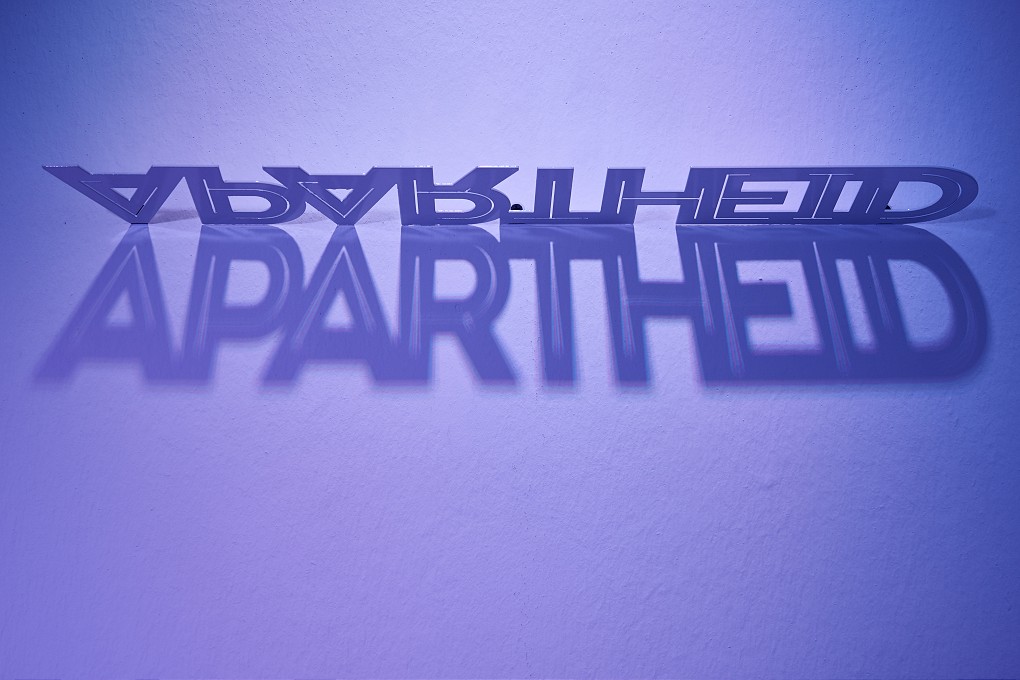 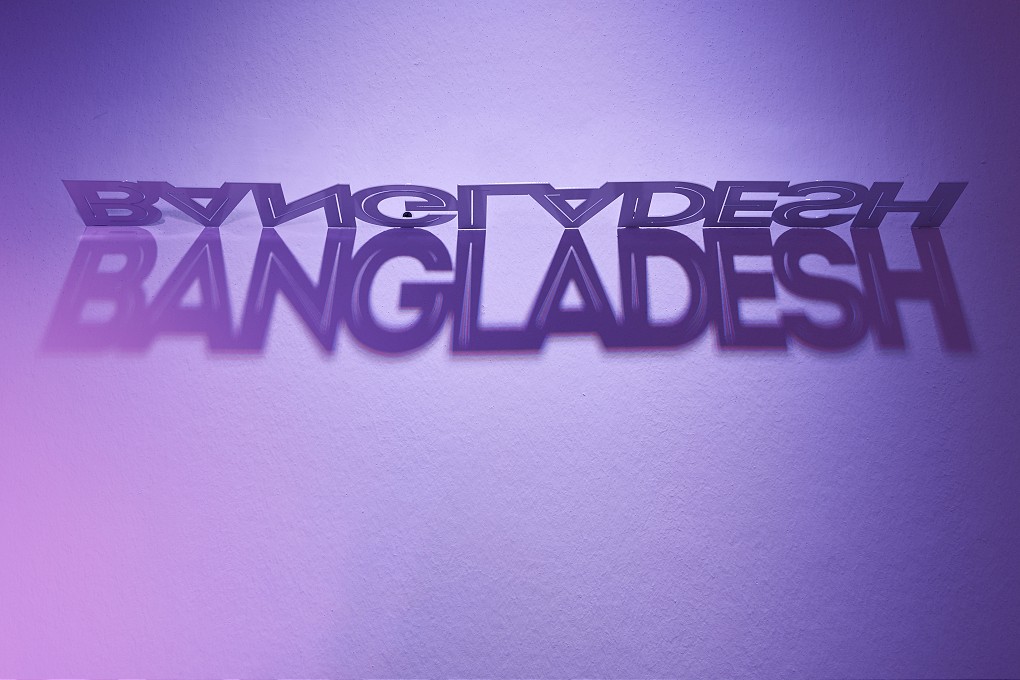 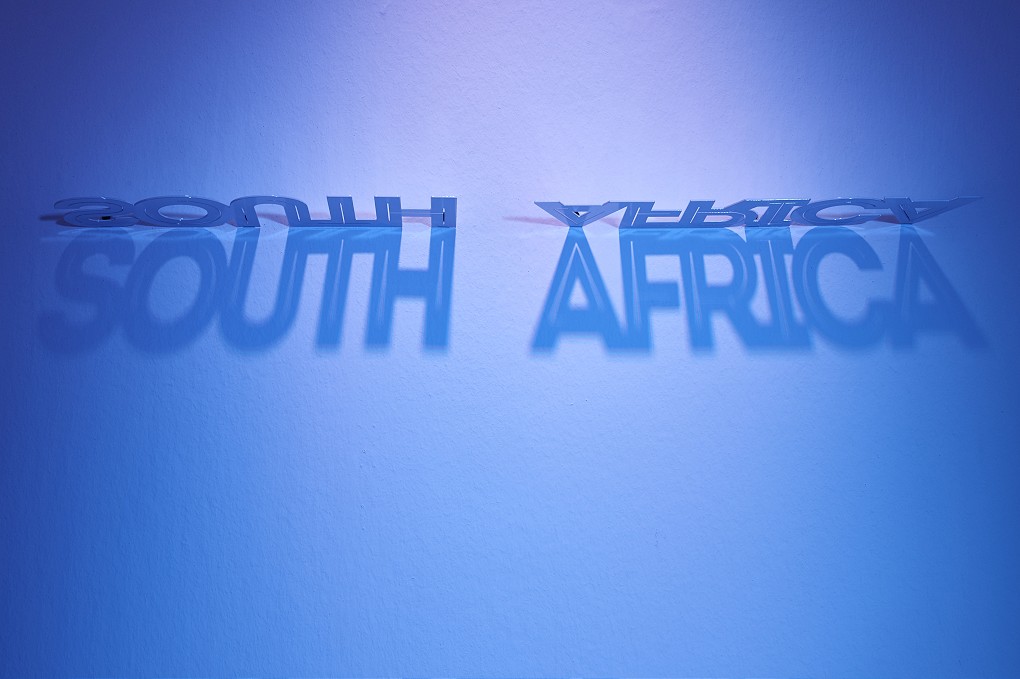 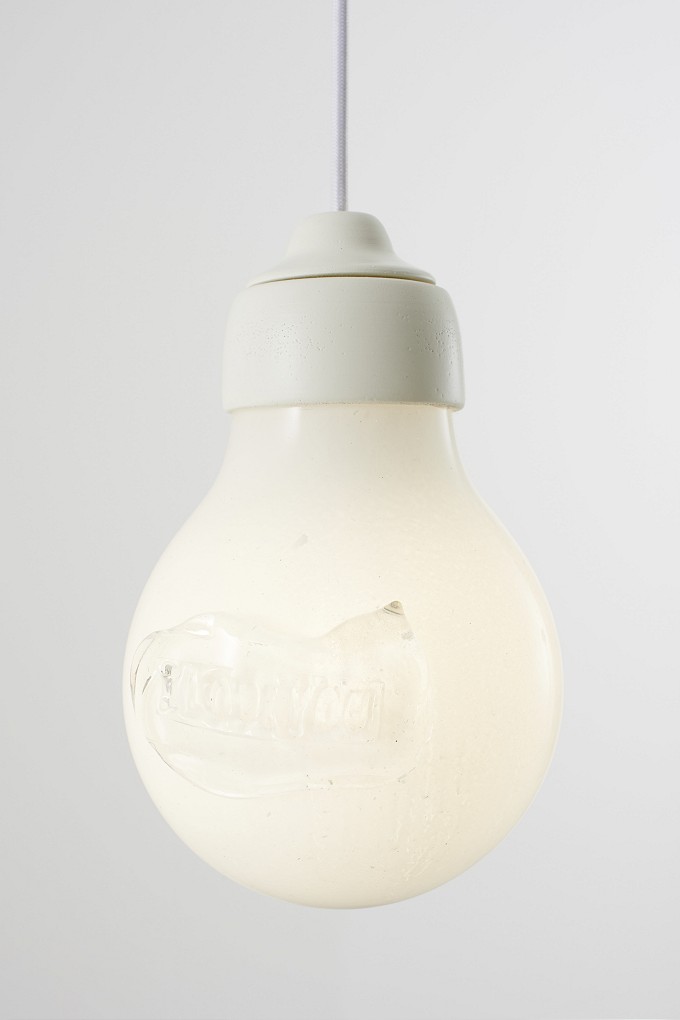 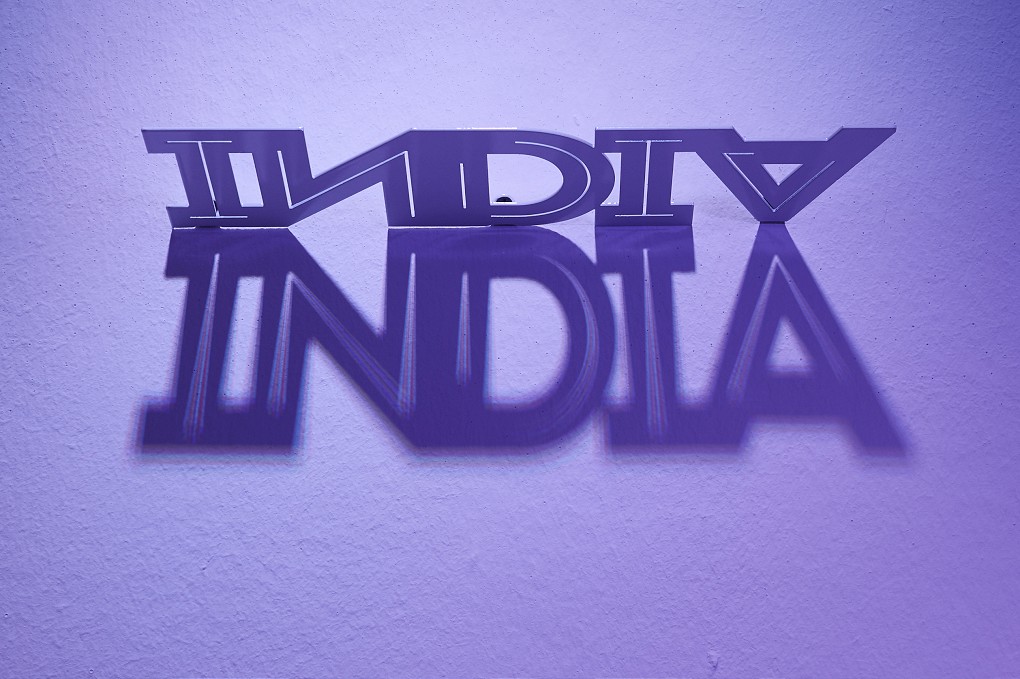 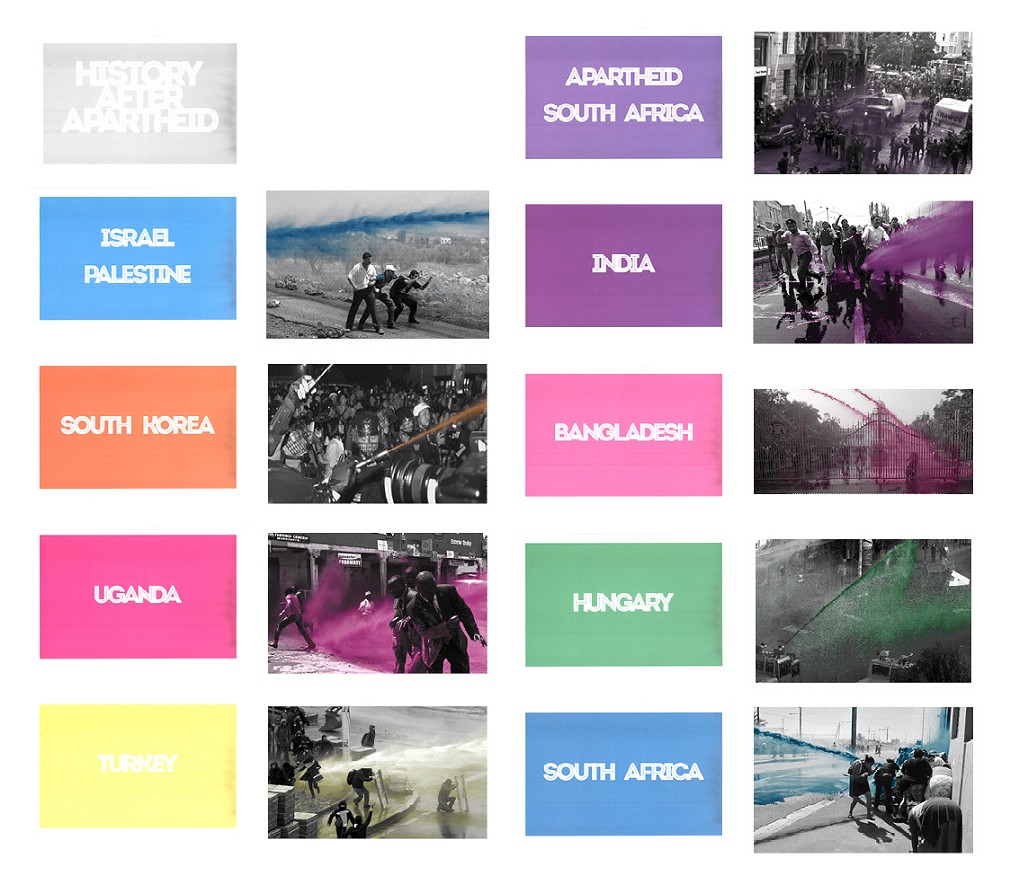 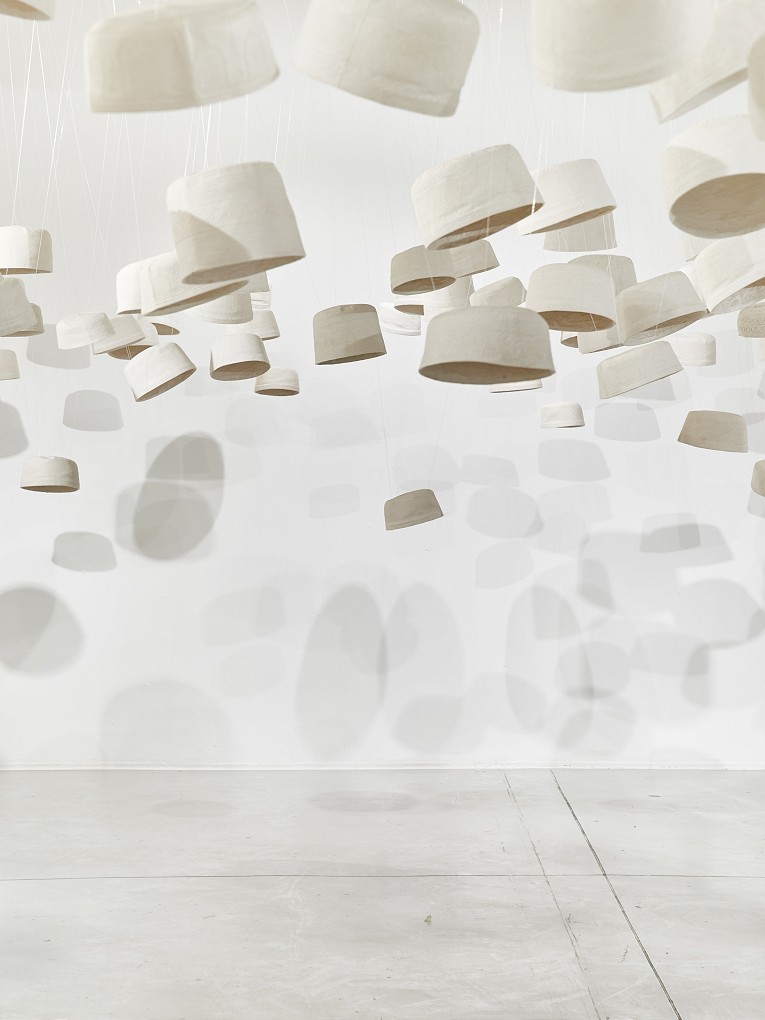 History after apartheid is the first solo exhibition by Haroon Gunn-Salie at Goodman Gallery Johannesburg. The exhibition casts light on transitional contemporary South Africa, defined by the history of colonialism and apartheid in a fractious global context of violence, radicalism and neo-colonialism. Consisting of three thematically related bodies of work, the exhibition elaborates on areas that have come to define Gunn-Salie’s practice: site-specific intervention, public art and dialogue based collaboration.

The exhibition takes its name from a new work in the form of a major interactive installation, a portfolio of two-colour lithographic prints, and a two-channel film. History after apartheid addresses the apartheid security forces’ use of purple dye dispensed from water cannons on armoured vehicles to mark protesters attending mass democracy marches and demonstrations, to identify and arrest those in attendance. The first truck-mounted water cannon was used for riot control in 1930s Nazi Germany. It was re-appropriated by the apartheid security police adding dye to the water stream. This image of purple stained people fleeing police has become iconographic of the mass liberation movement against apartheid and persists throughout the global-south.

The installation makes use of a series of shadow sculptures and timed, interactive lighting drawing parallels between the contexts: pro-democracy protestors in India blasted with purple dye; Ugandan police painting opposition leaders in luminous pink; Bangladeshi lawyers protesting outside the Palace of Justice painted a pale pink; Hungarian police using a combination of blue and green to disperse a pro-Socialist demonstration in downtown Budapest; Turkish teachers coloured bright yellow while marching in Ankra for secular education and South Korean protestors marching against US president George W Bush’s visit to Seoul illuminated in orange. In lower Woodstock, Cape Town, a protest by the Ses’khona Peoples Movement is broken up by a South African Police Service water canon dispensing blue and Israeli police using bright cerulean blue to identify Palestinian stone-throwers in Bil’in.

While the exhibition takes its name from History after apartheid – which will also have a presence within the Gallery’s windows, playing with notions of access and visibility – the show will be dominated by an expansive installation commemorating Imam Abdullah Haron, who was killed in police custody in 1969. Titled Amongst Men, this work was created in collaboration with his widow Galiema Haron and daughter Fatiema Haron-Masoet. Amongst Men considers the figure of Imam Abdullah Haron, the intersecting histories of Islam and the resistance to colonialism and apartheid in South Africa. The installation conceptually recreates Imam Haron’s funeral, which was attended by over 40 000 mourners after he was murdered by apartheid police in 1969, by suspending a series of over 400 individually cast kufiya. It is accompanied by a haunting sound element: a recording of a poem written at the time of the Imam’s untimely death by James Matthews and read by him in old age.

New sculptures build on Gunn-Salie’s dialogue-based collaboration with Galiema Haron and Fatiema Haron-Masoet illuminating the stories of the women who continue his legacy Smile-cries is created through extensive interviews with Galiema Haron and is created in further collaboration with the Central Muslim Burial Service in Pretoria. This work is a visualisation of Galiema Haron’s realisation upon seeing her husband’s body in the morgue. Imam had 27 bruises on his body, but she said it seemed the one side of his face was crying, and the other smiling, laughing almost. The sculpture presents a cast of the body of the artist, set in M1 plaster and marble, wrapped in accordance with Muslim burial tradition. Created with Imam’s daughter Fatiema Haron-Masoet, Remember – I love you recalls the indelible message Imam left for her, and for the world. Haron-Masoet was six years old when her father was killed. Her direct memory of her father is through the eyes of a child. The artwork is made up of a hand-blown light bulb, suspended at child height, with lettering protruding from either side of its surface.

The final major body of work within the show is Soft Vengeance, a series of sculptural works dealing with the current controversial Heritage debate in South Africa, which addresses the psychology of memorialisation and presents the seemingly shackled cast-iron grip the colonial West still has on Africa. The evocative works are based on casts of the ‘bloodied’ hands of statues of Jan van Riebeeck (cast directly from a statue of the Dutch colonist in Adderley Street in central Cape Town), Bartholomew Dias and Cecil John Rhodes in Cape Town, and Carl von Brandis and Paul Kruger in Johannesburg.

The bodies of these figures are implied by the ‘ghosted’ presence unseen beyond the gallery wall. These dismembered hands offer both an appropriation and a rearticulating of disquieting symbols of preceding power, and a reflection on what their legacy has engendered today. The first work in the series was created especially for the South African pavilion at the 56th Venice Biennale, which runs until 22 November 2015. The work is motivated by the lack of transformation in South African heritage and education institutions and public spaces today, a debate that has gripped the South African media and polarised the public in 2015. Following a month-long student-led Rhodes Must Fall movement at the University of Cape Town, a statue of colonist Cecil John Rhodes was removed from the campus on 9 April.

Dissent has rung out against these figures countrywide, seeing the defacing of other memorials with different coloured enamel paint. Protestors have also used symbolic acts of ‘necklacing’ statues, and even the dismounting of a soldier, from a memorial to horses who died in the South African war. This public action has, arguably, been spurred by President Jacob Zuma, when he said earlier this year: “The arrival of van Riebeeck disrupted South Africa’s social cohesion, repressed people and caused wars.” Centuries later untransformed public spaces enforce the continuation, as concrete reminders, of the everlasting and all-powerful colonial legacy. South Africa’s public spaces are bereft of symbols of the trauma of the people, past and present. It is a stark reminder of how much work is yet to be done.

Haroon Gunn-Salie was born in 1989 in Cape Town, and is currently based between Cape Town and Johannesburg. He was an active participant in the local contemporary art scene while completing his BA Hons in sculpture at the University of Cape Town’s Michaelis School of Fine Art in 2012. Gunn-Salie was placed in the top five of the Sasol new signatures competition in 2013. His work was selected to form part of Simon Castets and Hans Ulrich Obrist’s 89-plus project, and Gunn-Salie participated in 89plus programme with Obrist at the 2014 Design Indaba. In 2015, Gunn-Salie’s work was selected to feature on major international exhibitions including Making Africa: A Continent of Contemporary Design, at the Vitra Design Museum, the 19º Festival de Arte Contemporânea SescVideobrasil and What Remains is Tomorrow, the South African Pavilion at La Biennale di Venezia.

Join us on 8 September at 7pm, at Goodman Gallery Johannesburg, for a conversation between artists Haroon Gunn-Salie and Adejoke Tugbiyele who will have exhibitions running at Goodman Gallery Johannesburg and Cape Town simultaneously. The works of both artists deal with the experience of Africans in post colonial settings fraught with migrancy, gender inequality and homophobia, as well as navigating complexities of memory. Journalist and author Rebecca Davis will moderate the discussion.

Haroon Gunn-Salie (b. 1989, Cape Town) translates community oral histories into artistic interventions and installations. His multidisciplinary practice utilises a variety of mediums, drawing focus to forms of collaboration in contemporary art based on dialogue and exchange. Gunn-Salie completed his BA Honours in sculpture at Michaelis School of Fine Art at the University of Cape Town in 2012, where his graduate exhibition titled Witness presented a site-specific body of work focusing on still unresolved issues of forced removals under apartheid. The artist worked with veteran residents of District Six, an area in central Cape Town where widespread forced removals occurred following the Group Areas Act of 1950.

Significant exhibitions and projects that have featured Gunn-Salie’s work include: Simon Castets and Hans Ulrich Obrist’s 89-plus project, for which he participated in the 89plus programme with Obrist at the 2014 Design Indaba in Cape Town; Making Africa: A Continent of Contemporary Design, which travelled to the Vitra Design Museum and Guggenheim Museum Bilbao (2015); What Remains is Tomorrow, the South African Pavilion at La Biennale di Venezia (2015); and the 19º Festival de Arte Contemporânea Sesc Videobrasil (2015).

Gunn-Salie was placed in the top five of the Sasol new signatures competition in 2013. At the 19º Festival de Arte Contemporânea Sesc Videobrasil in 2015 he was awarded the first ever SP-Arte/Videobrasil prize, designed to encourage and publicise the work of young artists whose lines of research focus on the debate surrounding the Global South. As part of the award, Gunn-Salie presented a solo exhibition at Galpão VB during the SP-Arte fair in São Paulo in 2016. In 2018, the artist’s work commemorating the Marikana Massacre, Senzenina, formed part of the Frieze Sculpture exhibition, London, and in the same year he was the recipient of the FNB Art Prize.

Haroon Gunn-Salie is currently based between Cape Town and Johannesburg.